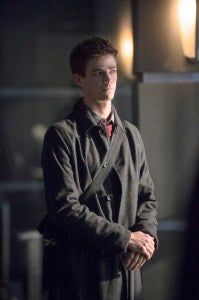 The CW Network have released 30 new images from "The Scientist," next week's episode of Arrow featuring Glee veteran Grant Gustin as Barry Allen--the police scientist who will later become The Flash. We'll share some of the images in a second post soon--there's what appears to be a pretty major spoiler in one of them--but at left is the long-awaited first look at Barry Allen. Gustin will star in two upcoming episodes of Arrow before appearing in his own pilot as The Flash, which The CW hopes to launch as a series next fall. The original plan had been for The Flash to make his debut on Arrow--which may still happen; plans for Arrow episode 2.20 haven't yet been revealed since this morning's pilot announcement shook things up. Please note that he does not appear to be wearing a bowtie.

Arrow Meets The Flash in Photos From "The Scientist"