The episode begins in the Arrowcave, with Oliver working out (shirtless, natch). Outside, a FEMA truck is hijacked by a pair of guys on motorcycles; Roy Harper picks up their distress call on the police band and drives toward the ruckus, with his lights off, turning them on at the last second and causing one biker to crash into a parked car. He loops around toward the other, who fires a gun at Harper's car; he swerves and ends up flipping over.

Ultimately the cops show up to arrest Harper, with him telling them that the "real" bad guys are getting away.

At the club, Ollie asks Diggle about his girlfriend and he's evasive. Thea shows up and, when her phone rings, it's someone alerting her to Roy's arrest. 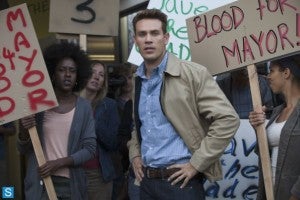 In an interrogation room, Laurel is grilling Roy about "the Hood." She's not interested in his stories about Black Canary, just about catching the Hood, and she's convinced he knows something since they found an arrowhead on him at the scene of the crash.

Ollie and Thea show up to bail out Roy, and Laurel tells him to ask Roy about the Hood. Ollie asks Diggle to bring the car around to pick them up, and Ollie tries to talk some "sense" into Roy, but Roy has a plan to help the FEMA shelters that are being forced to close by the repeated robberies.

In the island flashback, Oliver and company are trying to figure out what it is that led the people they just killed to the island. While Slade and Shado are trying to make actual plans, Oliver is off alone, regretting having become so brutal to save Shado. She goes to try and help him by leading him away.

At the FEMA hospital, Oliver and Diggle arrive determined to figure out what's going on. Outside, Sebastian (Brother) Blood is campaigning. Oliver goes outside and Blood confronts him about his family's responsibility in the earthquake. Oliver assures him that he's going to do everything he can to help and then leaves, to catcalls from the crowd.

Back at the Queen offices, Felicity is throwing a fit because Oliver has reclassified her job as his personal assistant--something he's done so that he can have her in proximity. 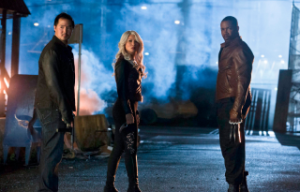 He asks her to make reservations for him, Diggle and Diggle's girlfriend next week--which sets off a "you haven't told him?" and "He's got enough on his plate" the next time Diggle and Felicity are alone.

Back in his office, Oliver turns on the news and sees a report about people hating him at the hospital.

In the island flashback, Oliver tells Shado that he's worried the island is turning him into "something terrible," and she tries to calm him down. She tells him that everyone has a demon inside of them, that the challenge is to bring balance to the darkness. "The killer and the hero" is part of the yin and yang she explains to him, then kisses him and the two begin to make out.

Back in the present day, Felicity has discovered that FEMA is delivering opiates to the hospital in 20 minutes; they know the motorcycle gang will come, but Oliver wants to stop them.

He shows up, taking down a couple of gunmen, before China White shows up and kills the driver. After some trash-talk between the pair, Bronze Tiger shows up and attacks Oliver; the two fight ot a standstill when the police show up to arrest them. Oliver makes brief eye contact with Laurel before taking off, using smoke bombs to obscure his escape while Bronze Tiger runs the other way.

Back at the club, Thea fires Roy, telling him she's not going to let him be in her life if he's going to keep putting himself in danger.

Oliver has invited Blood to his office, where he tries to convince him that he's a friend to the Glades. Blood doesn't believe him and starts pontificating; Oliver offers to prove him wrong, offering up a deal to help the people in the hospital. They're to meet tonight at the club, where Ollie will use his public persona and his influence to help raise awareness and pressure other rich people into helping the earthquake victims.

That night, The Hood meets up with Laurel, who tells him off for not saving Tommy; she promises to put him in jail and tellls him never to speak to her again.

That night in the club, Blood approaches Laurel Lance; she yells at him for being mean to Oliver, but he says he's apologized. Neither of them knows where Ollie is.

In the elevator, Oliver gets a call that the next pharmaceutical shipment is happening at the moment. He has to abandon Laurel, Blood and the charity gala at the club to suit up and go after China White's gang. Blood then uses the gala as a venue to attack Oliver again for failing to show.

White and her men have already killed the driver when Ollie shows up on a motorcycle, blasting through their little pack.

The police arrive and are, unsurprisingly, looking for Oliver rather than the bad guys. They're in the wrong spot, though, as the police surveillance server has been hacked by Felicity who is showing them file footage. While Oliver is fighting China and Bronze Tiger, Diggle takes the truck to make the delivery. Oliver, then, is having a hard time tracking down Bronze Tiger while China White is attacking Diggle in the truck. Ollie keeps getting slashed from the shadows; Diggle crashes the truck, throwing China White from the vehicle.

After trying to shoot arrows at Bronze Tiger a bunch of times and having him slash them out of the air, Ollie finally connects--with a trick arrow that sends an electric surge through Bronze Tiger, knocking him out. He calls to Diggle, discovering that he's indisposed, but when he gets to the scene, Diggle has chained up China White. She tells Ollie that even though he's changed, which is obvious because he didn't kill her, the police will still never see him as a hero. Ollie says it doesn't matter, so long as the city is safe.

Back at Queen, Ollie watches the news report, which takes him out of it. He has figured out that Diggle's relationship fell apart and apologizes to him for not having been there.  Diggle heads home for the night, leaving Oliver to work, where he watches Blood on TV. Felicity comes and brings him coffee.

In the island flashback, the trio work their way to a rock, the photo of which was on a photo in the possession of the bad guys they killed. Near the rock, Ollie finds something hidden in the woods; it's a cave full of human remains (with misshapen skulls); they were apparently Japanese World War II soldiers. Oliver finds a necklace on one of the men's bodies with a stone arrowhead on it, engraved with Japanese characters.

Ollie goes to talk to Laurel, arriving at her office, and after a brief conversation with her, she presses a panic button and there are dozens of cops surrounding him.