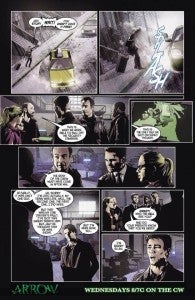 Fans who haven't yet seen "The Scientist," the first half of Arrow's two-part midseason finale that aired on Wednesday night, can now watch it for free on The CW's website. The ad-supported video can't be embedded, so you'll have to click over there or take our word for it. The show''s official Facebook page, which releases key scenes from each episode drawn as a comic book, have done so with the introduction of Grant Gustin's Barry Allen--the character who will one day be The Flash. In all the excitement over the episode this week, we also failed to share the latest episode of Blood Rush, the Bose-sponsored Arrow micro-episodes that air during commercial breaks. Here, we get to see Roy Harper and Felicity Smoak work in concert to keep Roy from being caught by security guards after having stolen a blood sample from a hospital in previous episodes. Check it out below.