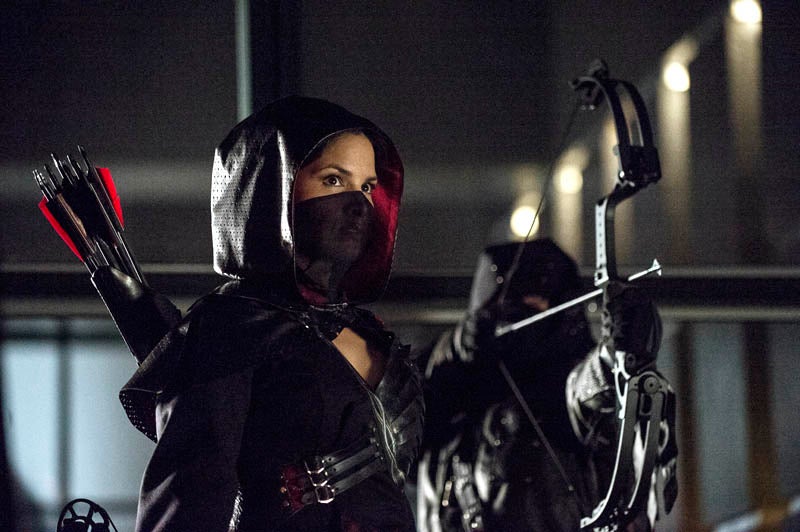 Tonight's episode of Arrow sees Nyssa Raatko, the daughter of Ra's al Ghul and former Heir to the Demon, in the sights of the League of Assassins after leaving her father's side to take up training Laurel Lance, the Black Canary, in Starling City.

Ironically, it's Oliver Queen who's after her, while she sides with Team Arrow in a reversal of their long-entrenched positions in the series.

Katrina Law, who plays Nyssa, joined ComicBook.com to talk about the episode.

This week is a big episode for you; has it been interesting to play off of Matt Nable? Is it challenging since you have such an elaborate relationship but so little screen time with him?

Well, the wonderful thing about Matt Nable is he's so incredibly talented and rounded in his acting that it actually makes my life easier working with him. We joke all the time that he and I feel that we have a very believable, excruciatingly terrible father-daughter relationship and as soon as we get done with a scene, we just look at each other and we start giggling because we have so much fun, just being dysfunctional towards each other.

I think that Matt Nable and I have a really good chemistry so it hasn't been that hard working with him. We work in very similar ways and when I'm acting with him, there are moments where I think "Oh! This man could be my father, and I have no problem bowing down to him and respecting him and also being fearful of him." Also, he has no reflection of my real-life father because my real-life father is amazing and wonderful. But I also think it helps that Matt Nable has a daughter himself and he's used to chastising her, because there are a couple of times when he's chastised me on set or during the scene and I actually kind of cringe for her, I'm like "Oh, Daddy, no, sorry!" So it's been a lot of fun and it's been very easy and fortunately Matt Nable and I get along really well, so finding chemistry and the levels and the layers hasn't been hard.

Nyssa was not a very well-known character outside of hardcore comic fans. As you've developed this character arguably as much as most of the comic book writers who have dealt with her, has it been gratifying to go from every interview starting with "When are we going to see Talia?" to having a distinct identity of your own?

[Laughs] It has been, and you know, you always want people to love your character, because you're putting your work out there and you want people to appreciate it and it's really gratifying when they do. You bring a sense of life to the character that they can relate to, whether they bond onto the character because they love it or hate it or whatever.

But I think Greg Rucka, who created Nyssa, did a wonderful job. He created a really complex character and even though she's a little different in the Arrow version, between Greg Rucka and Marc Guggenheim and Andrew Kreisberg, they just made this beautiful model for me to play with and to flesh out.

It is less stressful to not be Talia, to be honest. She's been done so many times that you kind of feel like there's a bible that you have to stick to. So when it comes to Nyssa, giving her a kind of British accent, making her a gay character, designing the look of her costume, I think it's kind of been a free-for-all and that's been really liberating and fun for everybody across the board, including hair and makeup and wardrobe and the writers and myself.

I know a lot of people have been crying out for the Talia character and I do think that it would be a lot of fun for sister and sister to kind of go after each other since I do know that in the comics, Nyssa at one point kills Talia over and over, trying to get her to join the League of Assassins, so there's another dysfunctional relationship to explore if they ever wanted to. But it's been great. I love playing Nyssa; she's a beautiful, complex character.

We've seen a lot more of Nyssa's human side this year, especially with Laurel. Is it challenging to find that level when you're being so different from always-badass Nyssa last year?

I definitely think as long as the script is good, you just kind of roll with it, but it has been gratifying to see the softer side of Nyssa. I think no matter who you are, everyone has a softer side and a vulnerable side, it's just a matter of when does it come out and who brings it out. I do know that first scene where I find Laurel in the alley and I say, "I was looking for a reminder of your sister," and she says, "Well, let's go get something to eat," I remember for the first time having to be vulnerable and having my power taken away from me, and just being a little insecure as an actor, going "Is this right?" Because it suddenly feels like a very real person instead of this very over-the-top, indestructible badass chick from another world.

So there was a little bit of insecurity but I just had to trust that the director would tell me if something was going wrong, but they never said anything and I think it worked.

But since then, it's been easier because now that I know that's acceptable for the character, it's easier to just go there. And Nyssa has become more beloved to me because she is a well-rounded person.

You know, earlier in the season when you had been defeated and Oliver had you in the cage, I remember that you did a really good job of giving off a vibe that said your character was sitting there thinking "If this door opens, I'll drop him in one punch." Do you think it's fair to say that when we do get a look into Nyssa's more vulnerable side, it's almost always on her terms?

I don't know that I would consider it a conscious decision on her part. I feel like there are people who have had very hard lives or rough upbringings one way or another and when you first meet them, they're hard to approach and difficult to talk to but then there's that one person who sees them fully. I don't know that the person necessarily has the choice. I think there's just people who can touch them and can reach them. And I think that Sara could touch Nyssa and reach her in a way that nobody else could, and we're finding out very quickly that so does Laurel.

Clerks 3: Breaking Down the Trailer for Easter Eggs and View Askew References