Ten days ago, Latino-Review.com reported, and backed up by El Mayimbe, that Asa Butterfield (Hugo, Ender's Game) had been cast as the new Spider-Man. After that news broke several trades denied Butterfield got the part, but did verify he is the frontrunner.

That same day, a link to that story was posted on Reddit. Nothing unusual about that, except for the fact that Asa Butterfield himself dropped in and made two comments, which he later deleted. He did so using the screename "Stimpers," which he verified for an AMA years back.

Because Butterfield hasn't appeared in a lot of projects over the past few years, many outlets have been using old images of the actor when he was much shorter. This has led to a misconception about his height, which Butterfield clarified.

He then deleted those comments. Why? Notice how he didn't confirm nor deny the report. Was he instructed by Marvel or his agent to delete them?

And those aren't the first comments Asa has made regarding Spider-Man on Reddit. Here's two more comments (screengrabs) he made months back. 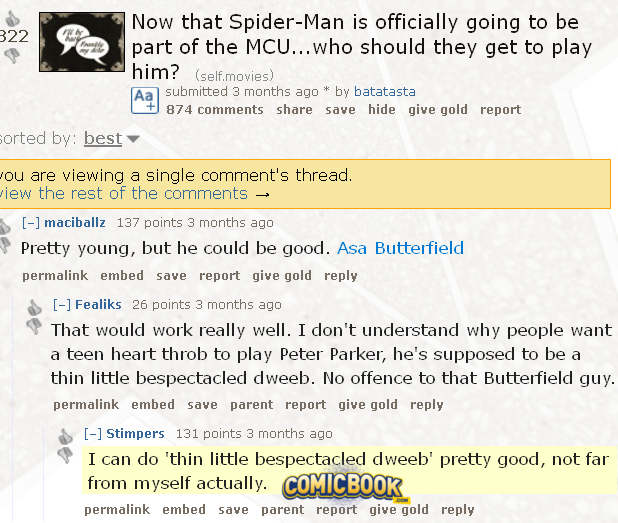 Asa Butterfield Comments On Spider-Man Casting Report, Then Deletes Them