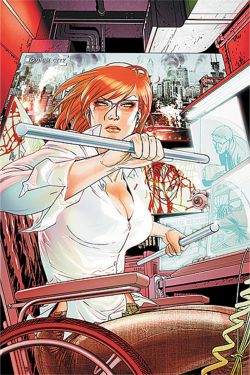 While it’s no secret that DC Comics is planning something with Barbara Gordon, until recently head of the crimefighting Birds of Prey, what that plan exactly is remains a bit of a mystery. The last pages of Birds of Prey’s final issue showed Barbara in an old storehouse, staring up at her old Batgirl costume in a glass case. The back-up feature ends with her staring at that same costume, now lying flat on a bed.

Any reader who has any knowledge of Birds of Prey knew that Barbara’s role as Batgirl, even though she had "retired", was forever ended when the Joker shot her in the spine in the one-shot The Killing Joke, part of an attempt to drive Commissioner Gordon insane. It almost worked. After a time of recuperation, she retrained herself into the super-hacker Oracle. She became an often-called upon resource for DC heroes due to her skills, and even proved herself in hand-to-hand combat when the time called for it. One recurring element though for part of the series, mostly after the departure of writer Gail Simone, was Oracle being shown in a state of doubt and regret about her role as Oracle; it became a constant theme during the last several issues, perhaps to set up Oracle: The Cure, DC’s three issue limited series featuring her.

Obviously, anyone who has had a major physical and psychological trauma will carry that forever, in mind, body and spirit in varying degrees of intensity, and I don’t want the impression given here to be one of mockery towards the character; I think she’s one of the most fascinating in the DCU, but we seem to be headed for a pivotal turning point with the character, and it would be wise for DC to bring some sort of next step with this character forward.

The specifics of what will happen in The Cure are still unknown, but there’s no shock in DC’s choice of such a provocative title for this series. Are they hinting that she will walk again and return as Batgirl? Anything can happen, and here are some possible scenarios.

Barbara Gordon remains Oracle: Not unlikely. She’s been Oracle for almost 20 years, and has been proven a vital part of not just Batman’s world, but DC’s as well. She may have disbanded the Birds of Prey team to get some reflection on her place in the world, but the fact that she’s seen back in Oracle action, this time searching for the Anti-Life Equation, in issue one of The Cure shows that she’s not just going to be idle during this time. DC keeping her as Oracle provides an excellent support network for whoever ends up as Batman at the end of Battle for the Cowl, and it certainly doesn’t rock anyone’s world too much. One of the big arguments for keeping her as Oracle has always been that she’s such a role model and important figure as a disabled heroine. Will that argument remain?

Barbara Gordon becomes Batgirl again: This almost happened. In an interview with Newsarama a couple of years ago, Alex Ross hinted at the fact that there were plans to revive her involving the Lazarus Pit, but that those plans were scrapped. Could there be some other plan in the works with biology or technology? The return of Batgirl would certainly set up an interesting potential partnership with Robin and Batwoman. How would that impact her relationship with Dick Grayson? Would she inherit the role of defender of Gotham if Dick seems so unwilling to step out of Nightwing’s costume and into the bat symbol? The storyline potential, and the attention it would draw to DC, would be enormous.

Barbara Gordon becomes Barbara Gordon: This is probably the least likely of the three, although it could happen. If DC is looking to scale back and reboot its “Bat” titles, then having Oracle simply retire from crimefighting altogether would make a certain amount of sense. At the end of Birds of Prey, her arch-enemy Calculator, swore he would hunt her down and destroy her (Oracle), and he’s already begun rearing his head in the first issue of The Cure. This might be a good reason to stay out of sight. What would Calculator do with the storehouse of information Oracle has at her disposal? Maybe she’ll retire for good and make peace with her life once and for all.

So good readers I now turn this over to you. What will happen to Barbara Gordon? What do you want to see happen to the character? What can you see in this particular Oracle’s future?

Barbara Gordon, Oracle or Batgirl: Who Will Emerge?