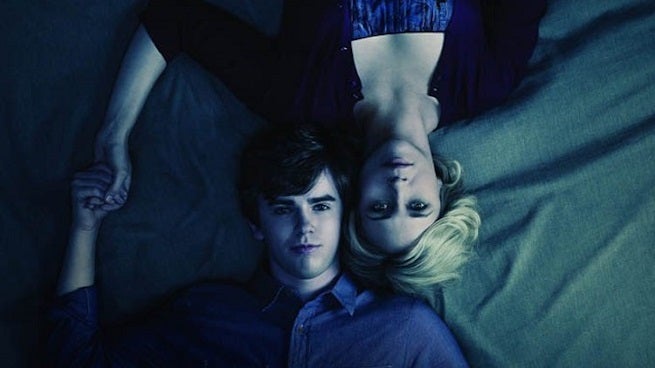 The third season of the fan-favorite Psycho prequel series Bates Motel will debut on A&E on March 9 at 9 p.m. ET/PT, the network announced today.

After a blissful summer of closeness with his mother, living within the safe confines of home and the Bates Motel, Norman’s fears about what really happened with Blaire Watson resurface and Norma questions what really happened. Forced to look at the truths about Norman for the first time, their deeply intricate relationship continues to evolve. Norma finds herself turning to the other man in her life, Norman's half-brother, Dylan (Max Thieriot) and begins to rely on him in ways that she never expected. This relationship inevitably triggers jealousy in Norman and a new kind of love triangle between Norma and her two sons erupts. Estranged brother and uncle, Caleb (Kenny Johnson) returns to haunt the family throughout the season challenging the family bond even further. Pressures of the outside world take a hold of the family when newcomers Kevin Rahm (“Mad Men,” “Desperate Housewives”), Tracy Spiradakos (“Revolution”) and Ryan Hurst (“Sons of Anarchy”) arrive at White Pine Bay. After a summer of living at the Bates Motel, Sheriff Romero (Nestor Carbonell) and Norma have grown closer but there will always have that troubling question mark surrounding Norman. Something doesn’t feel right, but spite of his instincts, Romero finds himself continually drawn back to the Bates family -- and to Norma. Emma (Olivia Cooke) also determined to find out what is happening to Norman becomes more emboldened, fearless, goes after the things she wants. Familiar face, Bradley (Nicola Peltz) returns to surprise the family and digs up old memories.

The Returned from Lost's Carlton Cuse will debut at 10 p.m. ET/PT immediately following.