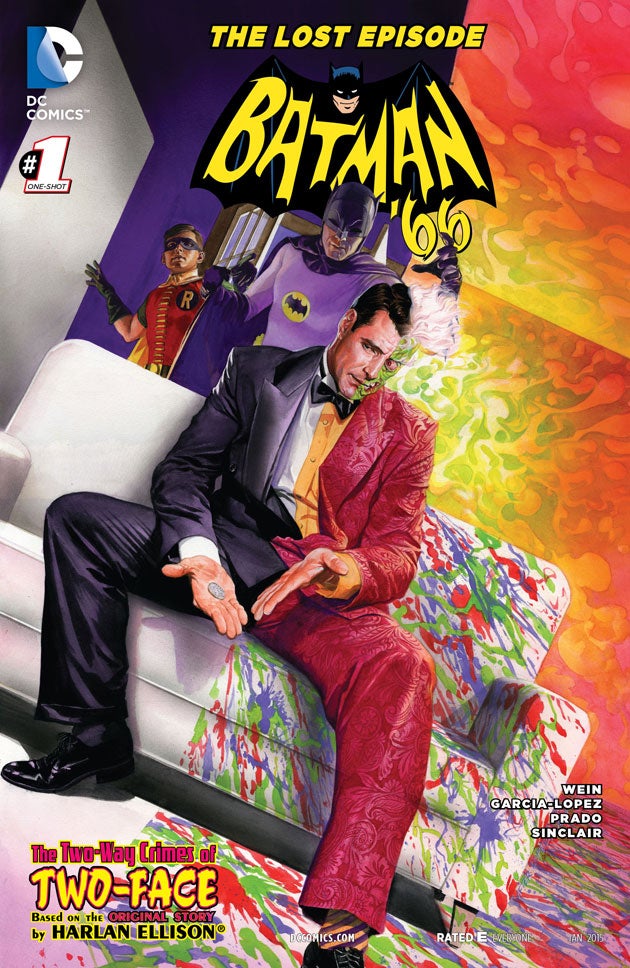 The key to a successful adaptation is more than simple mimicry. It requires the successful creation of tone, mood, and theme that is similar to the source material, but must take advantage of its new medium in doing so. Slavish devotion to the original story or design is a sure fire way to create an adaptation that is far less than its origin. The key to a great adaptation is to capture the experience while giving it the necessary freedom to exist independently. This balance is a difficult one to strike, which is what makes the publication of Batman '66 #1: The Lost Chapter so impressive. As a comic that attempts to recreate a famously unproduced episode of the classic television show, it is an excellent adaptation.

Stories have long circulated about Harlan Ellison's script for Batman '66 that would have introduced the classic character of Two-Face. Discussion of who would have been cast in the role is a classic subject of debate for fans (like myself). The loss of this episode is two-fold in that not only was Two-Face never featured in a singly campy hour long romp, but Ellison's full script was never made into reality. This comic is probably as close as we can ever hope to seeing the episode made and it manages to both summon the magic of the show and function independently as a well crafted comic book.

Harlan Ellison's plot is retained for this story and it comes with the sorts of inspired set pieces and twisty crimes that fans of the writers might expect. His outline is included in the 80 page issue and serves to show how faithful the adaptation is to his ideas. Len Wein still deserves ample credit for transforming these ideas from a television outline into a comics script. Although both are visual media, comics are told with a unique set of tools and Wein shows that he's a craftsman in pacing out scenes in pages instead of minutes.

Wein also provides the dialogue, which is incredibly important in maintaining the tone of Batman '66. The script is loaded with puns, cornball humor, and alliteration. You can hear Adam West and Burt Ward exchanging kind words and advice in your head as you read along. Wes Abbott's lettering provides some help in this matter as the bolded flow of words ably match the speech patterns of the actors.

Penciler Jose Luis Garcia-Lopez, inker Joe Prado, and colorist Alex Sinclair really bring the story to life though. The style of The Lost Episode reminds me of an issue of Astro City in that it is simultaneously nostalgic and timeless. They make Gotham City along with its extravagant affairs and nefarious hideouts pop in a way that could fit in the 1960s or the 1990s. It's of a gentler time before our own, but it could be as early as yesterday. They embrace the fun elements of the story, guiding the reader's eye capably to the coolest and craziest characters and props in each panel.

It is Garcia-Lopez that also helps to draw forth what makes The Lost Episode an excellent adaptation. He serves the story better by emphasizing elements that could only have been done in this comic. There are sets and panels that would have been impossible to create in 1966. A massive underwater cavern and Batman swimming deep below the ocean would be possible on a modern budget, but set in this world, they are wow-worthy moments. He also fits the onomatopoeic effects of the show comfortably into the action. Each punch and kick lands with a splash of color and sound effect, yet the flow of action remains natural. It's something that I would argue the comic does better than the source material.

The nagging question of who would have played Two-Face will always remain, but Batman '66 #1: The Lost Episode is still a dream come true for most fans. It is an adaptation that feels honest and faithful to its source and is an absolute blast to read on its own.

Batman '66 #1: The Lost Episode is a Fun and Faithful Adaptation (Review)