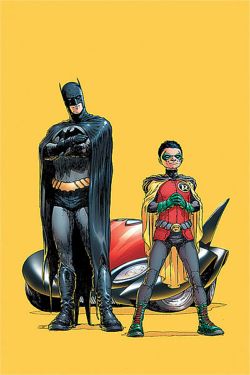 If you had told me the basic premise of Batman & Robin #1 without telling me the artist and writer on the series, then I don't think I would have liked it. I've always preferred my Batman to be Robin-free. I've also always been more fascinated with the dark, brooding detective aspects of Batman, then the gadgetry and gimmicks of Batman's various vehicles and his utility belt. So if you told me that there was going to be a new Batman & Robin series, where the dynamic duo traveled in a flying batmobile and fought a giant toad, then I would have probably groaned and mumbled something unprintable about how DC Comics is determined to kill the Batman franchise. I write all this, so that readers can truly understand, how completely surprised and blown away I was when I read the first issue of DC Comics' new Batman &Robin series. As I mentioned in the first paragraph, I probably wouldn't have even picked up this comic book if I had only been told the premise behind it and not the writer and artist behind it. The fact that Grant Morrison is the writer on the series and Frank Quitely is the artist on the series was the motivating factor for me to at least give this new series a try, and I'm glad I did. First, in regards to Frank Quitely's artwork, it is stunning. While Quitely's version of Batman is different than most recent takes on the character, it is the absolutely perfect look for the series. Quitely breathes the words written by Morrison to life with absolute perfection. It's incredible that Quitely is able to draw a Batman story that looks both nostalgic and futurific at the same time. Next, in regards to Grant Morrison's writing, it is both intriguing and captivating. The most powerful thing I can say about Morrison's work is that he has taken a basic idea which I would otherwise have had no interest in and has crafted it into one of the best comic books I have read all year. I absolutely hate the idea of a flying bat mobile, but Morrison actually makes it work. I couldn't help but chuckle, when one police officer asks Commissioner Gordon, "You really believe the freak saw Batman and Robin in a flying batmobile, Commissioner Gordon?" The basic plot in the first issue of Batman & Robin #1 was solid. It introduced a character called the Toad and laid the groundwork for what looks to be a strange circus-type story. However, what really impressed me the most about the first issue was how Morrison started to develop the relationships between the characters. The Batman in the story is Dick Grayson, and the Robin in the story is Damian Wayne. The beauty of this concept is that even though Dick's wearing the cape and cowl, Dick acts more like Robin than Batman, while Damian in Robin's bright yellow, red, and green, acts more like Batman. Damian is truly his father's child. When Dick whines and moans to Alfred about taking on the mantle of Batman, Damian is quick to quip, "If you're not up to it, stand aside, Dick Grayson." Later, while in the flying batmobile, Damian tells Dick, "You can have my respect if you earn it, that's all I'm saying. You're not my father." In one issue, Morrison has created possible the most interesting twist on the Batman & Robin relationship ever. I really can't wait to see how things pan out between these two characters. If I had any complaint about Batman & Robin #1, then it would have to be that it wasn't long enough. The story whetted my appetite for more, and this is one case where I would actually have gladly paid more for a double size issue.