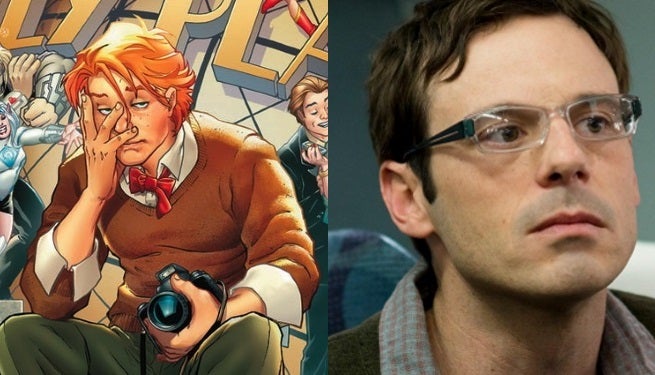 Another casting rumor concerning Scoot McNairy has hit the Internet. Where previous rumors pegged McNairy to join the Justice League as The Flash, The Devil's Eyes is reporting that McNairy will actually play Superman's pal, Jimmy Olsen.

The rumor that McNairy would be playing The Flash began circulating after photos of McNairy wearing green-screen socks on set showed up on Twitter, with the common theory being that the socks were there so that a super-speed effect could be added in post-production.

What those socks are actually rumored to be for leads us into SPOILER territory. You've been warned.

The report suggests that Jimmy Olsen was in Metropolis during Superman's battle with General Zod in Man of Steel. Jimmy was pinned under some rubble and eventually rescued, but lost his legs and now walks using two prosthetics, which will be added digitally in post.

Here's the direct quote from The Devil's Eyes, which claims to have gotten the information from an extra who worked on the film:

The extra states it like this: "Scoot is playing Jimmy Olsen, but with a bit of a twist. Jimmy was injured during the battle of Zod vs Superman. His legs where pinned under falling building rubble and that caused him to lose the legs. He now walks with the use of two prosthetic legs."  The source goes on to add "He doesn't blame Superman for it [his loss of legs]. He feels grateful that Superman saved the world."

If this rumor turns out to be true, it seems like the film is doing its best to mount a defense of Superman's actions in Man of Steel, which could be taken as a kind of meta-commentary on fan reactions to the film, with the rumored government hearings on Superman's actions standing in for fan criticism of those same actions.

As for McNairy, he has stated in at least one interview that he hopes to stick around the DC film universe for a while. Taken in context with this rumor, this either suggests that Jimmy Olsen has a larger role to play in the ongoing DC film saga – or at least in Superman's branch of it – or casts doubt on the rumor entirely, as some will consider Olsen not a significant enough character to reappear in later films.