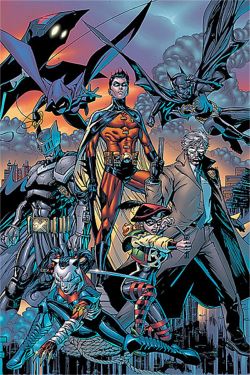 In our review of Battle for the Cowl #1, several things became readily clear: 1. It appeared that Gotham City was crying out for a savior as gangs of criminals ran rampant. 2. Every costumed avenger in Gotham, and even some beyond, were doing all they could to help avoid chaos. 3. Dick Grayson made very clear the fact that the only person fit to wear the cape and cowl of Bruce Wayne was Bruce Wayne.

Would he feel the same way in this issue?

Now that Black Mask has returned from the supposed dead, setting loose all the Arkham Asylum alumni in the process, we open with Two Face thinking that all this increased madness, and the destruction of his "merchandise", has to be caused by his chief rival, The Penguin, instead of Black Mask. A more important matter emerges quickly after this scene. Is the Batman who burst onto the scene in issue one, guns blazing, criminals dying, really Jason Todd? Signs quickly point to yes, as he refers to Nightwing by name, possesses superior fighting skills and mentions several things about vengeance and justice that echo Todd’s thoughts on the way the world of vigilantism should work. Even the narration, told from the point of view of this Batman point in that direction, but it's inconclusive.

Is it really Jason Todd? That question never really gets answered, perhaps for a very good reason. Several people in this issue refer to this armed and dangerous Batman as Jason, but Batman neither confirms nor directly denies the insinuation, offering instead a condemning of what he perceives to be failure on the part of Tim and Dick to keep Bruce's mission alive.

While Nightwing and Damien confront this new Batman over his identity, Black Mask moves on to another phase of his plan, using villains Jane Doe and Firefly to make a strike against the Gotham PD; needless to say there are damages, as the main GCPD headquarters goes up in a massive explosion, while Black Mask watches from high above on a Gotham rooftop.

Tim Drake has decided to don one of Batman’s old costumes in an attempt to track down Batman/Jason Todd when he stumbles upon a Bat Cave of this new Batman’s creation. Tim also suspects Jason’s handiwork, and a battle in this cave ensues with some bloody results for Tim, as he quickly finds himself in over his head, perhaps not quite ready to wear the symbol on his chest.

Alfred once again confronts Dick about the need for him to pick up the mantle and to run with it, as he also sees the obviousness of this, and some dramatic images of Dick and several bats follow, but to his shock he sees the empty costume case with a note from Tim attached.

What works so well about this series is the way it’s able to layer storylines over one another without any getting in the way of anything else. It’s a nice touch also that equal time is given between Dick, Tim and, I suppose it is, Jason Todd. I’m personally not sold on the fact that this is Jason Todd 100%, but I could be wrong. There’s a great bit of visual irony in Tim Drake’s battle with Batman, when he resorts to beating Batman with a crowbar. Readers will quickly recognize that the panels and some of the poses closely resemble the way that the Joker beat Jason Todd to, supposed, death as Robin in A Death in the Family. A little wink and nod of acknowledgement to long-time readers? Maybe.

Issue three of this three issue limited series will be coming in just a few weeks, but it’s clear that any resolution as to who will lead Gotham out of the darkness may not be quickly settled, based on the outcome of issue two. Even though many have questioned the removal of Bruce Wayne from the Gotham universe, few can question the interesting and compelling impact it’s had on the Batman titles, especially considering the ramifications from this essential limited series.

Battle for the Cowl #2: The Search for Batman Continues