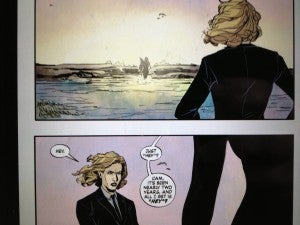 At the end of this month's issue of Batwoman, released last week, fans saw a glimpse of a mysterious woman walking up out of the surf, carrying a large object and greeting Cameron Chase in a more familiar fashion (as "Cam") than most people would do.

That person also intimated that they haven't been seen--or at least haven't seen Cameron Chase--in two years, which would peg their last "appearance" as having happened before the start of the Batwoman ongoing series.

No idea why the villain from Batwoman #0 would be so chummy with Cameron Chase, but that's a story set in the past, presumably shortly before the New 52 launched, and many of DC's titles are just now getting around to dealing with the fallout from their zero issues.

Her story was a central preoccupation of Batwoman's before the New 52, and informed much of the first arc of the ongoing series. But she's dead, right?

Not as such, no. Anybody who read last month's issue would know that Director Bones has apparently brought her back. Things like that happen sometimes in comics.

It's been intimated, but not actually said outright, that Montoya died before the start of Batwoman. Now, with Batwoman happily engaged to Maggie Sawyer, might we find out that her ex-girlfriend actually took a job with the same people Kate has been working for, and that she went off the grid at the direction of the DEO and had to fake her own death?

It doesn't seem totally implausible, certainly. And that could add quite a bit of drama to Kate's personal life.

This one's a longshot, especially since Martian Manhunter's name seems to have been shortened to just "Manhunter"...but it's very rare that you'll find a character who refers to Cameron Chase as "Cam," not as Chase. Rare enough that as soon as I saw that word balloon, I read it in Kate Spencer's voice.

Before she disappeared after Flashpoint, Manhunter was also imported to Gotham, something that would make her a bit more at home in this title.