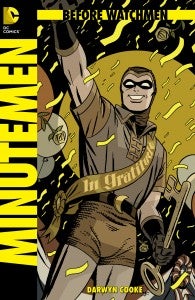 Darwyn Cooke is one of America's finest cartoonists; almost nobody would argue against that. It might, then, be completely intentional that DC decided to throw him out in front of the inevitable Before Watchmen firing squad. If, for instance, Straczynski's book had been the first on the shelf, the entire story would be about his recent failures on Superman and Wonder Woman; his impolitic comments at C2E2; and of course the controversy caused when his Superman replacement, Chris Roberson, recently chimed in on Before Watchmen itself. The actual content of the book would have come in a distant, distant second to the controversy. Cooke, meanwhile, is essentially beyond such things. He is the personification of everything DC is trying to put out there about Before Watchmen.  "Read the book," they're saying, "And you'll be hooked back in for more. The creative teams are amazing." He works rarely for the Big Two, and when he does the work is always spectacular. His own work outside of DC and Marvel has drawn raves and awards, and in terms of doing a superhero period piece, you couldn't pick anyone better for Minutemen than the guy who wrote The New Frontier, now could you? Ultimately, the answer is that Cooke delivers exactly what you'd expect. The book is very well-done, and it covers a lot of ground in not a lot of time. The page layouts are reminiscent of, but not a slave to Dave Gibbons' original Watchmen-style layouts. The grids, the motif of the clocks and the atoms are all there, but they aren't as overwhelming or obvious as they are in Watchmen. It's also got the color palette and dialogue style of a noir film. The book is called "Minutemen," and so how does it cope with the fact that it's essentially narrated by and starring one guy? He recaps the team, essentially giving each character two pages to shine before finally explaining in the final pages how it is that they came together. Exploring themes of violence and sexuality is an idea he continues from Moore's classic, although it's worth noting that Silhouette--singled out as Cooke's favorite Minuteman in a recent USA Today interview--goes from being a character whose sexuality was clear in Watchmen but never explicitly discussed to one whose sexuality almost immediately becomes a plot point. It's in keeping with the way her character was (briefly) handled in the Zack Snyder movie, and so in keeping with the way Warner may have decided that she works as an "intellectual property, shunting aside the way Moore created her as a character. Still, she comes out of it as an intensely likable character from whom you want to see more. The Comedian, on the other hand, is stripped of any of the humanity that made his horrible actions seem somewhat more understandable. Here, he's reinvented as a villain, and that's understandable, I suppose--not only do they say in-story that he's more a thug than a hero but Hollis Mason--who is established in the original Watchmen as someone with no use for Edward Blake--is the narrator. That we know he's a good man and Blake is not doesn't necessarily change the fact that it strips Blake of any redeeming qualities he ever had and feels very strange. Why would the rest of the Minutemen spend time with someone who is literally no better than their villains? Maybe the rest of the story will explain it, but if not it seems a gaping plot hole in an otherwise exquisite work.

Before Watchmen: Minutemen #1 is Both Flawed and Exquisite