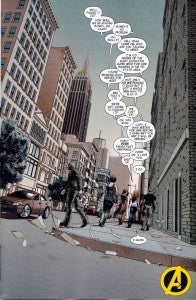 In the final issue of his long-running series New Avengers, Brian Michael Bendis bid what could have been considered a tongue-in-cheek farewell to Jessica Jones and Luke Cage, a pair of characters he's written for many years and who have been involved in almost every iteration of Bendis's Avengers teams.

And then, on the final page, Bendis seems to have given something fairly major away.

"Hey Avengers fans! that was fun! 232 issues of crazy!" Bendis tweeted earlier. "Is my last page hinting at a new book by me and @mikedeodato ??"

That page called back to the fact that, separately, the husband-and-wife superheroes had appeared as "Heroes For Hire," a term originally used by Cage in the '70s but which Marvel has brought back a number of times since, using the same title for different characters seeking something that suits it. Without actually saying the words, Luke Cage indirectly states that he'll be reopening his Heroes For Hire business as a revenue stream for the family.

Who else might participate? Well, it seems likely it could be a spot for Bendis favorites. Squirrel Girl and Iron Fist seem obvious choices, especially as Iron Fist had a role to play in Avengers vs. X-Men but hasn't shown up in Marvel NOW! solicitations since.

Of course, Bendis's final issue of The Avengers, Avengers Assemble and New Avengers have all shipped, but that doesn't mean he's actually done with the characters. He'll continue to write Iron Man on Guardians of the Galaxy, and he's got the Age of Ultron coming up, a long-delayed Avengers mini-event.