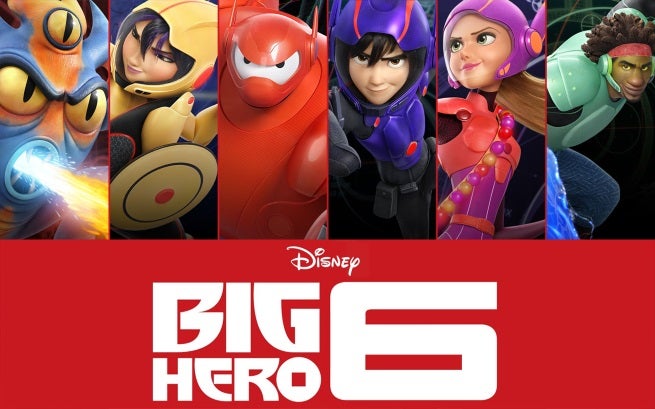 Producer Roy Conli worked on several big animated features for Walt Disney Animation, included Tangled and Hunchback of Notre Dame. His latest project is Big Hero 6, Disney’s first animated feature adaptation of a Marvel Comics property. The film has been a hit at the box office, grossing over $5.46 million worldwide, as well as with critics, winning the Academy Award for Best Animated Feature.

Big Hero 6 is making its Blu-ray and DVD debut this week, and so Conli sat down to talk to us about the film’s success, Stan Lee’s cameo, future plans, and more.

(Note: this interview took place prior to the Oscar awards ceremony.)

How does it feel to be the producer of the Oscar-nominated, third highest grossing animated movie in Disney’s history?

You know, it feels pretty darn good. The kind of cool thing was I also produced Tangled, and Tangled was actually the third largest internationally, but not domestically. So I’m actually beating myself, which is great.

I’m very proud, and so proud of this film because I think it’s so rich in theme, and so emotionally charged, and yet so entertaining and fun and action-packed.

When you the studio decided to do an animated Marvel film, what was it that attracted you all to Big Hero 6?

It was really Don Hall, one of the directors, who came up with the idea. He wanted to put his passions together. He loves Disney Animation and he loves Marvel Comics, and it just so happens that in 2009 Disney had purchased Marvel. So when he approached John (Lasseter), he literally said it was a five minute conversation, and John said “go find something.” He was still working on Winnie the Pooh, and finishing that up, so during his lunches he would go into his room and look at the wiki page for Marvel – which is pretty outstanding, if you’ve not been on it, it’s literally every character they’ve ever done – and he just went through and put together a list of things that sounded interesting, and Big Hero 6 popped up because he loved the title, but he didn’t know anything about it. Then, when he read the books - and there were only 13 created; I think in the 1980s there were six, and I think in 2004 there were seven, I think – there was just this spirit that he liked. He loved this idea that it had this kind of Japanese influence.

We went to Marvel, and Marvel were kind of aghast that we had chosen it, because they had actually forgotten that they’d actually done it. Then we sat down, and they said “this is great,” and they gave us complete freedom to take it and be ours. They said “you have no obligation to fit this into the Marvel Universe. This is all about making the best movie you can.” And having that freedom was phenomenal. And at the same time, Joe Quesada, who was Chief Creative Officer of Marvel, and Jeph Loeb, who is a writer in his own sense and also oversees television production here, became part of our story trust. But never - and we met with them, we screened this film nine times in its development, and they would come in, and we would sit down, and then do notes, and three months later we would screen it again. And it was in storyboard form, but as an animatic. They never said, “Well, you know, if this were Marvel, we’d do this.” It was always about what makes the best story, and in that case it was a really great experience.

There’s this existing narrative that part of the reason Disney purchased Marvel was to gain traction in the young boys market in a way that their established properties, like the Disney Princesses line, just weren’t doing. Do you feel like the success of Big Hero 6 makes that statement, that Disney is as much for young boys as for young girls?

One of the things that very much marked this as a Marvel story was the Stan Lee cameo appearance. In a way, he was even a bit more integrated into the film than he has been in the live action Marvel movies. Can you talk a little bit about how that all came together?

It’s so funny, because we had built in the idea of Stan as Fred’s father in the mansion, and we thought, okay, that’s going to be our Stan Lee tip-of-the-hat. And we’re all Marvel geeks over here, and comic books geeks, so we thought it was important to get him in there. And, just as animation ended, Guardians of the Galaxy came out, and both Don and Chris [Williams] saw it the first weekend, and they came back to me, white-faced, saying “we’ve got to get Stan Lee to do something for us, because everyone’s staying through the entire end of Guardians of the Galaxy, expecting something to happen, and we don’t want them staying until the end of our film, expecting something to happen, and then not happen.” So Chris boarded up the wonderful little scene at the end, with Fred’s father, and I called up Stan’s folks, and said “hey, we’re interested,” and I sent him over the script.

This is the great story. We decided to keep it a secret from our crew, and there were only 25 people in the studio who knew that this was going on. Zach Parish, who was our lead in animation, he would actually close the door and animate with our layout people. So it was 25 people, and when we first screened it to our staff at our wrap party, everyone was blown away and I think everyone was very excited about it.

With all of the critical and commercial success that Big Hero 6 has found, has there been sequel talks?

It’s funny, I’m asked more questions about sequels than we ever actually talk about it. Literally, we finished this film on October 13, and we have been around the world three times, releasing in different markets, and the guys are – we have our big Oscar celebration, and we’re keeping our fingers crossed, and legs, and arms, and anything we can cross, we’re crossing – and we’re going to take a little vacation, and, probably sometime in June, we’ll reconvene and talk about what’s next.

It’s a big commitment to build a sequel. As creative artists, that means directors will be working with these characters for, at this point, probably nine years straight. So it’s a big commitment for them, so they have to think long and hard, and I think they need to make sure they have a story worth telling. If they come up with something that’s really good, it will probably happen, but the wonderful thing about working here is they don’t push us into sequels. It really comes out from, if the filmmaker has an idea, and it’s a good idea, that’s when it happens.

If not a Big Hero 6 sequel, do you see the studio reaching back into Marvel’s catalog again for something new?

Yeah, but that will come down to the directors. Again, the way we develop scripts here, it’s all director-based. Don came up with the idea, he did the research, he found this property, and then we built a team around that. If there are other directors that are interested in diving into that pool, that would be great, but I think that it’s really important that we continue to tell stories that vary in tone and in characterization. So, if a director comes up with a good idea using another Marvel Comics character, it could happen.

With that in mind, is it safe to say you’ll be staying away from building the shared universe model that seems so popular in Hollywood these days?

Big Hero 6 is about to be released on home media, and I know the Blu-ray has lots of special features and previously unseen content. What material are you most excited for fans to get to see for the first time?

I mean, it’s always fun to see the deleted scenes. There was one great scene that was eliminated, and we actually almost had it fully developed and animated, and that was the reveal of Baymax for the first time. Just because of the way we structured story, it was really important, once we had it within the structure of the film, our two major characters are being introduced separately, and we needed to have an introduction where Baymax and Hiro were together for the first time.

That being said, I think the scene we had to pull is really entertaining and a lot of fun, and it’s great for the fans to be able to see that, because Fred is one of my favorite characters, and he has a big role in that as well.

Big Hero 6 released on Blu-ray and DVD on February 24.