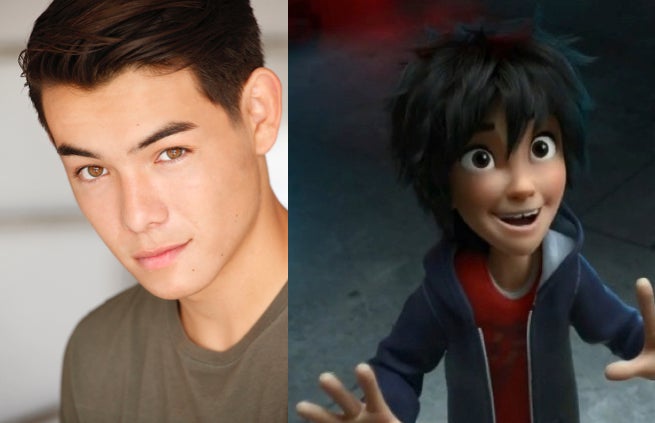 Both on-screen and off, Ryan Potter is Hiro Hamada. The actor will attest, both he and his Big Hero 6 counterpart share a history and background that's uncannily similar. Hiro lives in the city of San Fransokyo, a fusion of San Francisco and Tokyo. It just so happens that Potter hails from both locales. Hiro is selfless in his efforts to save the world, and Potter is equally heroic as the head of his own non-profit charity and an advocate for the "No H8" campaign. And, through pure coincidence, both characters are practically identical to one another.

It's through that connection that Potter was able to deliver a memorable performance as Hiro, flourishing in his transition from television to movie actor while holding up against Hollywood co-star Scott Adsit (Baymax). Just maybe, the earnest performance helped Big Hero 6 nab the Academy Award for Best Animated Feature in the 2015 Oscars.

With Big Hero 6's Blu-Ray release this week, Potter sat down with ComicBook.com to discuss why he was able to relate to Hiro so personally, how he landed the role, and why he'd love his next super hero project to be Teen Titans.

Until Big Hero 6, the bulk of your work was live-action acting for television. What was it like transitioning not just to voice acting, but acting for a feature film as well?

I had so much fun with the project, that people sometimes misunderstand when I say it wasn't hard. It's hard work, but I essentially got to play a younger version of myself. I think if it were any other character, I would have had a very difficult time. But I got to go into the booth and just be myself. The whole voiceover process is very freeing. You don't have to worry about how you look or what you're wearing, or what kind of face you're making. You go into those booths and you literally just create. You just pour anything that comes out of your mind into the microphone, and at the end of the day you're just exhausted.

But I thought it was going to be more challenging than it was. I found for other voice-over projects that it has been, but for this one it was very close to home, so it was relatable. It wouldn't call it easy, but it was fun.

What about Hiro made you think he was a younger version of you? How did you identify with the character?

I grew up in Tokyo and San Francisco, so I knew both cities like the back of my hand [Editor's Note: Big Hero 6 takes place in the fictional city of San Fransokyo, a hybrid of San Francisco and Tokyo]. I was in Tokyo until I was 10 years old, before I moved to San Francisco. San Francisco's been around for ever, and so many buildings are one hundred or 150 years-old. There's a real sense of culture, and the city just feels alive. So when they were combined, that's the best visual interpretation I can give you of how Hiro and I are similar.

And I'm not as smart as Hiro, but I very much have the same values as him. When I was 13 our 14, I had a similarly terrible sense of fashion with that long hair. So, Hiro and I are each other. I am Hiro.

Awesome. So how did you get the role?

A director I'd worked with in the past heard about the project, and he asked their casting directors if they'd seen me yet. They hadn't, so he got super excited because they were calling after-school programs and church groups everywhere, just trying to find an Asian-American actor to play Hiro. They set up the audition and I went in, and it was a different atmosphere. Usually you go in, and you do the whole song and dance and ask "How did I do?" But when I met with co-director Don Hall, the two of us just vibed. He's a phenomenal guy. He tested me on my Japanese pop culture knowledge, and instead of an audition we had more of a one-on-one work session. We went in there and spent an hour creating this character, and really finding how this kid feels, acts, and talks. It was great.

How did you prepare for the role? Did you read any of the Marvel Comics the movie was based on?

I owned issues #1, #4, and #5 of the original series, and skimmed through them. So, I was familiar with the project, but I didn't go too in-depth with it. But after that audition, I thought they might do a callback, so I bought all the comic books and read them. I found all the Big Hero 6 fan art that existed at the time, and just tried to consume any material that I could. But there really wasn't a lot of source material.

With that being said, Disney Animation really created their own version of the characters. They created the Disney version of Big Hero 6. In a way, we kind of created our own source material in those session where Don and I would just talk about the character.

And are you a fan of any other comics? Are there any superheroes that you're currently following?

I When I moved to the U.S., I didn't really collect too many comic books. I was more into manga, but once I got here, I fell in love with Spider-Man and Batman and all these different American superheroes.

If you could play any other comic book character in the future, either through voice acting or live action, who would it be and why?

So the Nightwing role on the upcoming TNT Titans series is what you'd want the most?

Absolutely. That would be unreal, and a dream come true.

We'll keep our fingers crossed. So to wrap up, if Big Hero 6 ever gets a sequel, do you think you'd come back to play Hiro?

Of course. This is Disney, you can't turn down Disney Animation. The magic that these guys produce is very addictive. Just going to Disney Animation and being able to see the creative side of the film, you really can't get enough of it.

Awesome. Thanks so much for your time, Ryan.
No problem, have a good one!

Big Hero 6 is available on Blu-Ray and DVD on February 24th.