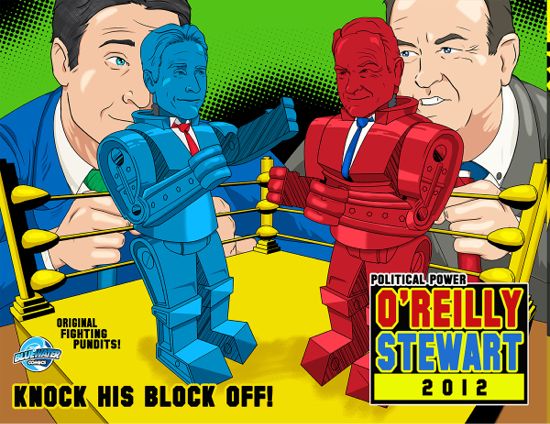 The cover of the Bill O’Reilly And Jon Stewart comic features the two hosts going at it Rock ‘Em Sock ‘Em robot style. Political Power: O’Reilly Stewart 2012 tells the stories of funny man Jon Stewart and Fox host Bill O’Reilly. Jon Stewart is the liberal host behind the satire news program "The Daily Show" and has become known as "the most trusted man in America." Bill O’Reilly is a best-selling author and the most famous conservative pundit on TV today.

“When we heard about the upcoming debate at Bluewater, we thought it would be a fun opportunity to showcase our bios in a commemorative graphic novel as a companion to the showdown,” Darren G. Davis, President of Bluewater Productions explained. “Political Power: O’Reilly Stewart 2012” gives the reader an informative look into the lives of these influential political personalities.”