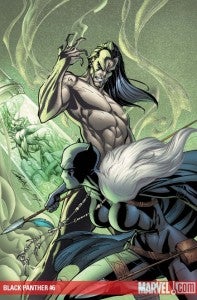 The first five issues of this most recent launch of Black Panther have all led up to this, the sixth and concluding issue of the first major story arc. After concluding the most recent series during the events of Secret Invasion, when the Skrulls unsuccessfully attempted to invade and conquer the country of Wakanda, the series was cancelled, leaving fans wondering what would come next for one of Marvel's most enduring characters. With this newest launch, the series took on a very serious tone, throwing Black Panther and his wife Storm into a life or death scenario that upsets the entire balance of power in Wakanda. With an attack on T'Challa leaving him in a state of limbo between life or death, the rise of Morlun, Devourer of Totems, and Storm and Black Panther's mother and sister, Shuri, left to deal with the chaos in these first five issues, how exactly, and effectively, would this sixth issue wind things up? In summary, with an air of the familiar coupled with the unexpected. Black Panther #6 seems to incorporate elements of stories that we've seen before, but refreshingly avoids feeling like a cliche. When we start this issue, Shuri has just been told by the Panther God that she is unworthy of assuming the mantle of Black Panther, Storm has made a deal with Death, through the magics of witch doctor Zawavari, to take T'Challa's place in death so that he may return to Earth, and Morlun continues his rampage of death through the country, seeking to destroy the Black Panther totem. A tall order to be sure! As Shuri, still in Black Panther garb, battles Morlun in the palace, Storm and T'Challa attempt to reconcile their situation and bargain with Death; who will stay dead, and who will return to life? In many ways this felt a bit similar to Peter Parker's predicament during the One More Day storyline, which resulted in the erasing of his marriage to Mary Jane, the idea of a sacrifice as irreversible in the face of an impossible decision. The real star of this issue is Shuri, as she leads Morlun on an epic chase through Wakanda, with him closely on her heels. Ken Lashley's drawings, Paul Neary's inks and Paun Mounts' coloring help to illustrate and illuminate the battle and the death enveloping the country at this time, as the issue speeds to its clever conclusion. In much the same way that we saw a quest in the first arc of Wonder Woman to determine who would carry that mantle, there are tones of that here in Black Panther's first six issues. The issue ends with the situation in limbo resolved, Morlun defeated in a way that readers will find interesting and perhaps a little unlike the royal family of Wakanda, and with Shuri's redemption from her "failure" in the eyes of the Panther God complete. An interesting feature of this new series in particular is the return to the mystical and magical as a vital story element. In many of Black Panther's most recent adventures, including his time with the Fantastic Four, a heavy focus on technology and scientific weaponry was present, but not so here. Writer Reginald Hudlin has made magic and the supernatural a breathing, living character in this series, but it's balanced in a way that it doesn't become a crutch or a deus ex machina, but it's rather a logical means to an end in this series. There is certainly room to explore in future issues, thanks in large part to the way magic has made its presence felt in these first six issues. Hudlin has taken great pains to craft a story that has grown and kept reader interest over these first six issues, setting the stage for Black Panther to set out on adventures that will thrill and excite readers. A Black Panther has emerged at the end of this issue, and she stands poised and ready to lead Wakanda further. Hats off to Hudlin and company for continuing to evolve the character and the series in a way that preserves the history of the character while making way for the future!