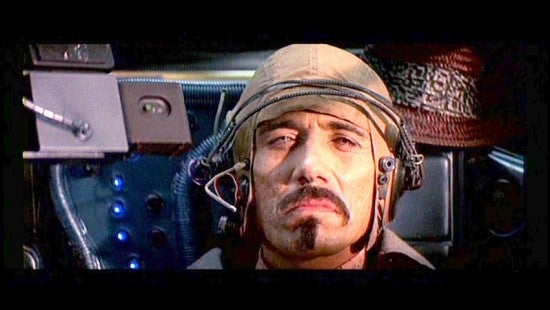 While Harrison Ford and Ridley Scott both appear serious about their Blade Runner sequel, which is expected to come along in 2016 or so, at least one of the original film's stars doesn't expect to turn up in the new movie.

Asked what he thought about the sequel during a Reddit AMA in support of his new John Sayles movie Go For Sisters, the Battlestar Galactica star told fans, "I am very grateful that they have decided to explore that world again. I have not been approached and I don't think I will be. I think the storyline will approach a different story in that world. I don't think it will have Deckard or Gaff in it."

It's interesting that he doesn't think Deckard will appear, in spite of widely-reported stories that Ford will be involved. It could be speculation on Olmos's part or, given the fact that sequels and spinoffs have been toyed with over the years, it's possible he knows or has heard rumors of some previous iteration and he's just applying that here.

What was his favorite part of doing the sci-fi classic, though?

"The whole film. Really," Olmos wrote. "I could not believe when I would walk on the set and see the locations. It was just amazing. It was a journey that I have never really experienced before. For instance when we walked down the main street where I meet Decker and he is having sushi at the bar, that whole street was four blocks long, four stories high. It had voice of the theater speakers on top of all the roofs on both sides all the way down the street. It had rain. It had smoke. It had flying cars. And all live with thousands of extras. You were in it. With Vangelis' music pounding us, they would bring it down at certain points and people would have dialogue. The whole rhythm of the street was choreographed. People moved to the pulse of the beat. People on bikes, cars suspended on cranes, it was a tremendous experience."