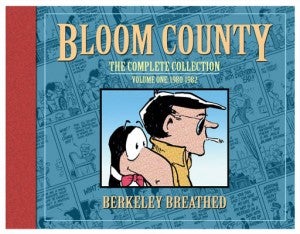 The beloved tales of Opus and company will live once again with news from IDW Publishing that they are bringing comic strip Bloom County to the public in a massive collection, The Bloom County Library. The collection, scheduled for an October 2009 release, will feature every daily and Sunday strip, in chronological order, of the series. For some of these comics, it will be the first time they have surfaced in reprinted, collected form ever! The series, known for its skewering of politics and pop culture during its run, became a phenomenon and developed a devoted following due to its savvy take on topics of the day. When the original series ended in the late 80's, other incarnations and spin-offs of the strip and its characters emerged, most recently the comic strip Opus, which ended its run in 2008. The Bloom County Library will add context pages throughout this five volume set, which are meant to give the readers a sense of time and place when talking about some of the people and events mentioned in the series.

Bloom County Collection on the way from IDW