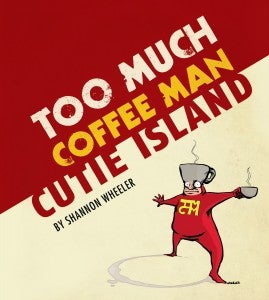 If you're a fan of the cynical, self-parodying humor that made indie comix great in the 1990s, then 2012 is the year for you! That's right, Shannon Wheeler is back at the helm of Too Much Coffee Man, one of the great creator-owned success stories of that era in comics, with a new graphic novel out in February from Boom! Studios.

“I bought one of the original Too Much Coffee Man mini-comics from Shannon himself back in Austin in 1990. Shannon and I go back that far, so it’s with great pride and joy that I point out that Shannon Wheeler is one of the alt-comix greats,” said BOOM! Studios Founder and Chief Executive Officer Ross Richie in a press release. “I've avidly followed his continued posting of Too Much Coffee Man online and couldn't help but want to bring it all to print.”

In the time since Richie bought that first mini-comic, Too Much Coffee Man became something of a sensation, with Wheeler turning out dozens of comics, several collected editions, t-shirts, mugs, toilet paper (no, really!) and even an opera based on the carmudgeonly superhero.

The book itself, Too Much Coffee Man: Cutie Island appears to be a collection of those online-only comics, which have never appeared in print before and which will likely see some tweaks to fit the format but be largely the same material hardcore fans of Wheeler's have already seen. For those who haven't seen anything since his Eisner Award-winning I Thought You Would Be Funnier, the volume will be a welcome collection of material, to be treasured most likely right on the shelf alongside Dark Horse's recent omnibus collections of Wheeler's classic Too Much Coffee Man work and Evan Dorkin's Milk and Cheese.

Boom! Has Too Much Coffee (Man)