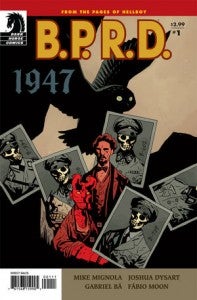 The Hellboy universe and franchise has grown exponentially over the past few years, with more and more recognition coming to the popular Dark Horse series, thanks to two successful film adaptations of the characters about and surrounding the demonic hero, but also due to the intense curiosity of much of the public with all things supernatural. Enter the B.P.R.D. The Bureau for Paranormal Research and Defense have had their adventures chronicled for only a few years now, but their popularity has brought several limited series over that time. Now comes the latest storyline, B.P.R.D. 1947. Taking place on the heels of the end of World War II, this new mystery seeks to touch on not only a new supernatural case for Professor Bruttenholm, head of the Bureau, and his crew, but also the emotional aftershock of a global conflict. The story as a whole takes great pains to not give too much away in this first issue, which feels slow at first but makes sense one the issue reaches its final page. A train full of captured Nazis is found slaughtered under the noses of their American guards, arousing suspicion from the professor. As he seeks to assemble a team who may be able to get to the bottom of this mystery, he culls men from various backgrounds who have all seen conflict during the war, each with their own horrific stories and experiences, to investigate a long-burned out and buried series of events in France. Most of the action of this issue focuses on the human experiences of the men during their time of war, giving the readers a bit of perspective on what these men have suffered and what, specifically, may make them qualified to undertake this mysterious mission. While the sense of action and adventure is not fully present in this issue, which may be a let down for some getting their first taste of this cast of characters, the book does pace itself in a way that sets high expectations for the next issue. A nice cliffhanger ending, of sorts, gives us a taste of the supernatural that readers of the series have come to expect, and there's enough spooky atmosphere to make it feel like the set up scenes for a thriller. What will the next issue hold for the ragtag band of soldiers assembled to investigate a burned out, abandoned chateau, home to a party that inspired a horrific opera, leading to the imprisonment of the writer/owner of the chateau? There are lots of other questions to consider here, such as should we care about slaughtered Nazis, as the professor's secretary points out? How do we compare experiences of trauma and personal in the face of the unknown? Mike Mignola and Joshua Dysart have taken pains to craft this story, and the first issue is full of promise in answering these questions. Hopefully the supernatural and suspense elements will intensify in issue two, but as a whole this first issue has set an effective and interesting stage for a good mystery in a long-respected series.