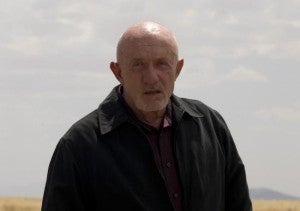 Jonathan Banks, who played Mike Ehrmantraut on the hit AMC series Breaking Bad, will join the cast of Community's fifth season, according to Entertainment Weekly.

Banks will appear in 11 episodes of the cult hit NBC sitcom's upcoming season, which is assumed to be its last. The thirteen-episode season will see series creator Dan Harmon return as showrunner, while losing stars Chevy Chase (who is already completely gone from the series) and Donald Glover (who has scaled his involvement way back).

This isn't the first time an actor known for his work on intense dramas has appeared on Community; Michael Kenneth Williams, best known for his work on The Wire, appeared as a professor in season three (he just took a role in Spike Lee's new film, if you haven't heard) and Banks's Breaking Bad co-star Giancarlo Esposito (who also appears on NBC's Revolution) has appeared in a couple of episodes as Chevy Chase's half-brother.

If they have to find a way to write Chase's Pierce Hawthorne off the series, it might be interesting to see whether Esposito and Banks might appear together onscreen again.