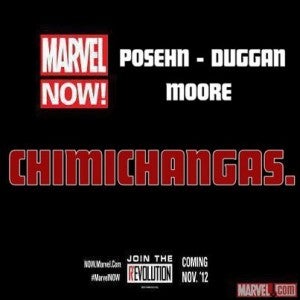 Okay, so we're dropping all pretense and just calling this one: Marvel Comics has released a teaser image that announces the new creative team for Deadpool as Brian Posehn, Gerry Duggan and Tony Moore.

The writers, of course, are comedians and not particularly associated with comic book writing. Posehn is best known for his roles on Just Shoot Me! and Mister Show, while Duggan has Attack of the Show! on his resume.

Moore, in addition to a recent run on the fan-favorite Venom relaunch, was the artist on the first arc of Robert Kirkman's The Walking Dead. Moore identifies himself as co-creator of the series, a claim that Kirkman denies, pointing to mastheads in the original issues that list Kirkman as the writer and creator, and to Moore as the artist. The pair are currently engaged in litigation over revenue sharing, with Moore claiming that Kirkman lured him into an unethical deal, and then reneged on even that.

It's another of their one-word, non-title teasers, like the "Invincible," "Indestructable" and "Worthy," so how can we be so sure the announcement is teasing a relaunched Deadpool?

Well, as you can see from the image at left, the word in question is "Chimichangas." If you can come up with another Marvel hero for whom that might be an appropriate teaser, e-mail ComicBook.com for your very special prize.

The series will launch in November, along with at least three other Marvel NOW! titles already teased and presumably, at a minimum, one more which will be teased tomorrow to close out the week.