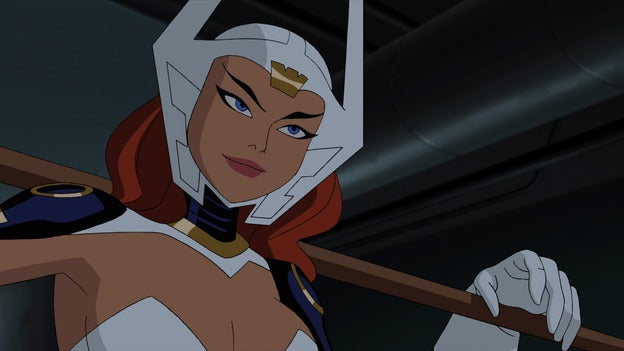 Bruce Timm has helped craft the DC animated universe for 25 years now. As one of the revolutionaries who changed what superhero animation could achieve with Batman: The Animated Series, Timm's name always grabs a fan's attention when it's attached to a television series or film.

His latest effort is Justice League: Gods and Monsters. It's a new parallel universe with a Justice League featuring familiar names, but highly-altered looks, history, and motivations. The ambitious project, launching in summer 2015, will include a direct-to-video animated film, and a series of shorts featuring the universe's individual characters of Wonder Woman, Superman, and Batman, followed by a full season animated series in 2016.

At the Machinima Newfront event in New York this week, the series' team incorrectly stated that Gods and Monsters' Wonder Woman comes from the army of Ares. But as Timm was quickly clarified in our interview on the entire Gods and Monsters project, that's not the case. As Timm revealed in our conversation below, Wonder Woman won't actually be connected not to the gods of old, but the god of new. Specifically: Jack Kirby's New Gods.

So they said at the press conference that Wonder Woman sees the smallest shift in this parallel world, since now in the comics she is actually the God of War…

Bruce Timm: That was actually a mistake, when they said that. She actually is, in our new version, not part of the Greek mythology at all. She's actually from New Genesis.

So we had to shift gears again, and I'm glad we did.

I thought her armor looked a little like Kirby's Fourth World…

BT: Actually, that's funny – I had actually designed that version of her before we even started talking about what to make her origin story. So it already had that Jack Kirby kind of idea in my head. When we started talking about, 'Oh, what if we get her out of Greek Mythology all together?' we had that drawing staring us in the face. I think it was Alan Burnett, my co-writer on the show, who said, "Why don't we just make her one of the New Gods?" And here we are!

Stay tuned for our full interview with Bruce Timm on Justice League: Gods and Monsters soon.