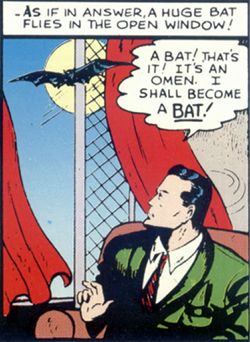 To follow-up on the earlier Comicbook.com article "Batman Dies Again And Still No One Believes It," the "demise" of Batman in Batman 681 and now Final Crisis 6 did surprise me and I give the staff at DC Comics respect for even entertaining the notion that Bruce Wayne could die. His death, unlike the "death" of Superman over a decade ago, is surprising because it reminds us that Bruce Wayne is simply a mortal with lots of tools, gadgets and learned skills. I'm not surprised that it gained media attention, as typically it seems that modern news outlets only give comics the time of day when a major pop-culture event happens, much like the ballyhooed "Death of Superman" and most recently the death of Captain America. Even the dissolving of Spider-Man's marriage made it onto a few outlets' web pages when that happened several months back.

For all the news surrounding the event of Batman's death, and there was a bit, I'm not convinced, and I question DC's motives in even doing the storyline to begin with. Even when the Batman RIP event was announced and the ominous artwork of a hollow, floating cape graced the cover of Batman 676 to kick off the storyline, I thought to myself "ok, this will be a metaphorical 'death'. He'll go on some dark night of the soul again and emerge as some sort of 'new' Batman." My other thought was that the Batman we knew was dead and he, I don't know, would reveal his identity to the public, briefly retire and give the mantle to long-time colleague Dick Grayson, or some other scenario where Bruce would take time off but eventually return. Even writers and contributors to the series acknowledged that Batman R.I.P. would be a more psychological piece. What happened? Enter Final Crisis.

While most of the general population can tell you who Batman is, how Bruce Wayne came to be Batman, at least three of his major villains, and perhaps even a couple of supporting characters in the series, most people remember him the way he began: as a young boy whose parents were killed who grows up to be a vigilante and fight the likes of The Joker, the Penguin and Catwoman for eternity. This was the bedrock of the ongoing Batman and Detective Comics series, both widely known by the general public for years. Then we get Final Crisis. A major storyline that seems to be happening on a parallel world, because he's blasted by a helicopter in one book and then facing Darkseid in another. The same argument could be made for Wonder Woman. In her series she's facing off against Genocide. In Final Crisis, she's a slave to the Anti-Life Equation. What's going on here? If a major event like the death of Batman can't even get continuity, what can? Why can't this 'universe changing event' actually happen in the series like other crossovers and industry events are prone to do?

To me, DC has done a typically DC thing in killing off Bruce Wayne/Batman. It's injected a spark of interest in the character that most people might reserve for films such as The Dark Knight or who may have stopped reading comics years ago and now want to pick up an issue or two to see what all the fuss is about. It's a smart move sales wise, but for DC's sake it must, must be extremely temporary, for the sake of the general public and the future of the character. Final Crisis will come and go and most people won't care about this trek into outer space and godhood. Take away Batman/Bruce Wayne from the collective consciousness, and you have a whole other matter.

DC Comics, Warner Brothers motion picture studios, and the public need Bruce Wayne to be Batman for as long as he can defy genetics and time itself. He's part of the public identity. The same people who stood in line for Supes biting it and then went out and bought up all the Captain America 25's also need Bruce Wayne to live and haunt Gotham. He is the only Batman they will ever know or care about. It doesn't make logical sense to release a film that was as enthralling as The Dark Knight ,which was sure to bring new fans to the series, reinvigorate older readers and bring back those who hadn't visited the pages of Gotham for years, and then perform the bait and switch that is now the second death of Batman.

Most non-comics readers like to be able to pick up a comic and recognize what's going on. They are not like the devoted followers. After all, we comic readers can be a critically savage group when it comes to characters and titles we have followed over the course of our lives, no matter how ridiculous they became (I'm looking at you, mod Wonder Woman). I don't buy the argument that DC used when it axed Superman yeas ago: that the public had taken him for granted. Not really. A majority of the country doesn't read comics, but the average non-reader still needs to be able to check in now and then and see that Gotham is still Gotham, Robin still exists in some form, and Alfred is still there to patch it all together. They care about these characters on the fundamental level that comic readers do. They just approach it differently and with more honed, intense interest.

Perhaps the jury is still out on the effect this will have on readers, old and new alike. Despite the bravery of the writing team, Bruce Wayne will have to return as Batman. DC Comics knows this, and in their heart of hearts, they're going to have to figure out a way to get him back and quickly. If movies like The Dark Knight are going to draw new readers into the series, they can't pull the rug out from under these people so quickly after the movie and DVD's release.

Admittedly, I am curious and excited about the upcoming "Battle for the Cowl" storyline, but then again, I'm a devoted comics reader.

Will Final Crisis totally redefine the character? I'm leaning towards no. At the time, Superman's death was supposed to be an earth-shattering event with effects we would still be feeling today. I can't say I even think about his death, other than when another character mentions it. I am intrigued though by the news that Birds of Prey, Robin, and Nightwing are all being cancelled. It will be interesting to see what DC is planning, but whatever it is, they better make sure the people who put their money down to see Bruce Wayne/Batman fight The Joker this summer will be able to get with the program if they so choose down the line. It's the only way for the comic BOOK, not comic MOVIE, industry to survive. The right to rearrange and create story lines always exists, and certainly it keeps comics interesting, but some things just seem to "fit". Bruce Wayne, alive and part of the Batman world, is one of those things.

Bruce Wayne Has To Be Alive!