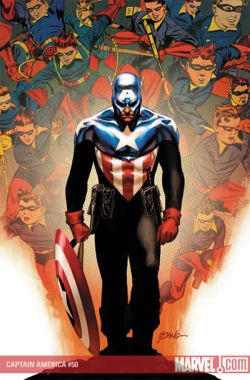 The most current incarnation of Captain America's solo series reached an important milestone this month with the release of Captain America #50. While many comics reach this number of issues, how many can claim that they reached it after having the main character die by assassination twenty-five issues earlier?

When Cap's shocking death occurred in issue twenty-five, it came on the heels of one of the lowest points in Steve Rogers' storied career as the patriotic Avenger. Having just surrendered at the end of Marvel's Civil War, effectively ending the debate on superhero registration with the government and the fifty-state initiative, Cap is being led into the courthouse to face charges for his involvement in leading the resistance against the registration act, his unwavering position being that the government shouldn't make mandates and invade the privacy of people who spent their lives defending the country they love.

An assassin's bullet to his midsection, from a brainwashed Sharon Carter, his love interest, ended decades of symbolic integrity and principal, and the image of Captain America's blood flowing down the courthouse steps seemed like one more indignity heaped upon a man who had meant so much to not only the fictional America of the Marvel universe, but the real United States that idolized and remembered him as a symbol of virtue and justice.

People who hadn't read a comic in years, ever, or who had read comics but just not Captain America flocked to comic book stores in droves, disbelief and curiosity on their faces. While at the time it may have seemed like a slap in the face to long-time readers of the Steve Rogers Captain America, it was perhaps one of the best moves that Marvel could have made in translating Captain America as a symbol and as a character into the modern mentality of politics and hope.

Steve Rogers' death provided the perfect opportunity for the gravity of the Civil War's outcome to be felt. Readers had the chance to see Tony Stark's grief and frustration over what had truly been wrought from his desire to see the Superhuman Registration Act made law and the pure villainy of the Red Skull, Cap's long time nemesis, and mad scientist Arnim Zola, who had a hand in controlling Sharon Carter's fatal shooting of Steve.

It was from these tragic events that some of the most intriguing and morally complex story arcs would emerge. With James "Bucky" Barnes taking up the shield and colors of his former mentor, redemption for his actions as the murderous Winter Solider may perhaps be possible. This new Captain America was a man with a painful and shameful past, complicated by his own expectations to live up to the uniform he now wore in tribute to his surrogate father, Steve Rogers. The new Captain Americasoon had stories that involved disrupting the Red Skull's attempts to infiltrate the White House by backing his own candidate who lulled the American public into following his cause. Most recently Bucky was responsible for stopping a Chinese scientist from creating a virus out of Cap's old friend Toro, the original Human Torch.

Throughout all of these adventures, Bucky has struggled to make peace with the man he once was as the Winter Soldier and the man who Steve Rogers always knew he could be. Issue fifty perfectly shows this struggle, thanks largely to Ed Brubaker's dynamic storytelling, as Bucky's growth from a sixteen year old troublemaker, to sidekick, and then to Captain America himself is shown through milestone birthdays and a typical lack of celebration on his part. It's through these personal vignettes that Bucky is able to reflect on what it means to him to be Captain America, and how he sees the work he currently does as a way to bring hope and justice to a world that offered none at the end to the previous wearer of the red, white and blue.

The United States and its new symbolic hero are cut from the same cloth. Both atoning for sins of the past, both wanting to be a symbol of strength in the face of evil, and both working towards a better tomorrow for all. Bucky Barnes embodies these elements through his every action. It's interesting that the past two years have provided so much drama, intrigue and suspense. Who would have thought that so much life would be breathed into a series and a character with the death of its mainstay? Marvel will acknowledge the heroic legacy of Captain America with a special issue number 600 next month. It's safe to say that the grand tradition and nobility of Captain America's spirit will live on, especially in this commemorative issue.