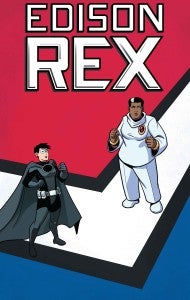 Last week saw the release of the most recent chapter in the ongoing saga of Monkeybrain's Edison Rex, wherein the world's most ingenious supervillain becomes the world's greatest (and least widely-accepted) hero after having finally killed his archenemy.

This issue, the world is finally starting to put two and two together, with regard to the timing of Valiant's disappearance and Edison's conversion.  What will they do with that information? And meanwhile, how are his former allies on the side of evil dealing with what they perceive as a massive betrayal?

ComicBook.com: After we talked a little bit the issue before last about the thing with the defunct publishers, it really came on like a freight train in this issue. Is it an idea that hit you a little later or is it just one of those things where name-dropping a bunch of characters here, it was bound to happen? 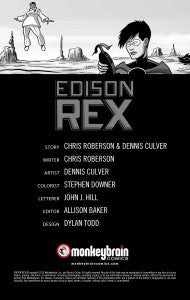 Chris Roberson: I think it was a mix of the two. Valiant was named way back when I first had the idea for the character that would become “Edison Rex,” but I didn’t really think about the “defunct publisher” connection. Then when we came up with the idea of the “golem” version of the character, it was a little while before we settled on Defiant as his name, and I think that Dennis suggested it because of the Valiant/Defiant connection. But then when we were coming up with our masked vigilante/dark avenger character, it didn’t occur to me originally that they would be named after a publisher, too. But Dennis sold me on the idea, and then the floodgates opened.

Dennis Culver: Yeah it sort of became an unofficial rule for our hero characters and it’s a lot of fun to figure it out!

ComicBook.com: Also: Does the fact that out of all those publishers, Valiant came back play into future plans at all?

Roberson: Not really. After all, the character was named Valiant *before* the publisher returned.

Culver: Or maybe it does? Every issue of Edison Rex has more secrets than the CIA!

ComicBook.com: Maybe this is a question for Dennis - Was it intentional, creating an older generation of heroes that has kind of aged like people actually age, in terms of their body types? Mirage in particular is obviously not at her fighting weight, and I kinda like that.

Culver: There’s a legacy aspect that we’re trying to drive home certainly but honestly my main motivation is to reinforce the idea that you can have interesting characters that are not the idealized form of the male or female figure. Mirage is clearly an homage to pre 52 Amanda Waller whose physicality informed her character. Making Waller skinny or Jim Gordon young or whoever else “sexy” and/or “edgy” is bunk. Contrast is important and making everyone look the same is boring. Bottom line, if the Nu52 is the State of the Union then Edison Rex is the Minority Response.

ComicBook.com: I love that Edison's "typical..." response takes the wind out of the sails of any drama the Warmongers are trying to establish in the kangaroo court. 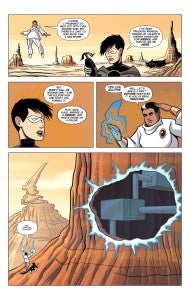 Roberson: Yeah, I don’t think that Edison has the slightest bit of respect for any of the people in that room.

Culver: And he probably has little respect for most people outside that room as well!

ComicBook.com: I know you've got a kid. Does Georgia like Pixar's Cars? My son loves it, and seeing Defiant try to defend Edison in "court" reminds me a bit of a scene from that...

Roberson: I hadn’t thought about that scene before, actually, but now that you mention it there is a resemblance there. It certainly wasn’t conscious! But Georgia liked the first Cars movie well enough, LOVES the Mater shorts, and doesn’t care about the sequel or spinoffs at all.

Culver: The only movie that has come up recently when Chris and I talk about Edison Rex is Citizen Kane. (See how next issue!)

ComicBook.com: It's funny--the heroes always have a trophy room. I feel like this is the first time I've seen a scene where the villains do, too. Is that somethign I've just missed in comics or do you think it's because they have fewer victories to savor?

Roberson: It used to be fairly common place, back in the silver age and into the bronze age. But in more recent years, it’s become de rigueur for villains to simply be ALL EVIL ALL THE TIME. And they often have no motivation other than the bloodthirsty pursuit of EVIL. When every antagonist is a cannibalistic rapist murder, it’s hard to picture them hanging out at home and polishing their trophies (unless those trophies are the skins of their enemies flayed and turned into decorations). Nobody has a CLUBHOUSE anymore, for god’s sake. And that’s what the Warmongers’ HQ is, really. A clubhouse where they keep their trophies.

ComicBook.com: Will there be fallout from this issue? On the one hand, the heroes missed Edison being there but on the other hand, the villains will almost certainly think he brought them with him. 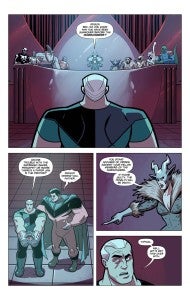 ComicBook.com: You know, it really never occurred to me until this issue that Edison's team is like a really demented Charlie's Angels...

Roberson: In our scripts and notes to each other, Dennis and I usually refer to the three supporting characters simply as the “Angels.”

Culver: Fun Fact, we almost did the non Mirage/Eclipse half of this issue from the pov of Rex’s Angels but once we hit on the Warmongers we had to put the focus on them.

ComicBook.com: Is Cerebella's "He's mine" meant to be on the level or an act for the villains? Or are you intentionally leaving that unclear?

Culver: There’s a lot of answers in previous issues of Rex.

Chris Roberson and Dennis Culver: Edison Rex Has More Secrets Than the CIA