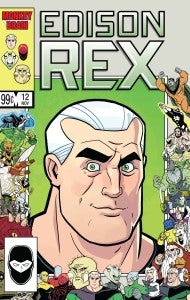 Last week's release of Edison Rex #12 brought the series' second trade paperback's worth of stories to a close on a somewhat ominous note, but that didn't keep the tone from being roughly as light as ever for most of the issue.

Especially the cover--which is an homage to the Marvel 25th Anniversary covers from 1986, which featured the title character of a book in a large panel framed by other popular Marvel heroes. Here, we've got Edison surrounded by the other heroes and villains of his universe.

What's next for our hero? And how smart is the world's smartest man, really, when he's got people plotting against him right and left this month? If you don't already have a copy, go buy one and read along with co-creators Chris Roberson and Dennis Culver as we discuss the issue...

ComicBook.com: So what made you guys decide to do that Marvel homage cover? It's glorious.

Chris Roberson: That was a Dennis suggestion, but one I agreed to immediately and enthusiastically!

Dennis Culver: Thanks! I'm selling it as a print here, along with a few other Rex related prints.

ComicBook.com: Is it just me or is that Teenpeace logo very similar to one the Titans have used before? If intentional, well done on John Hill. 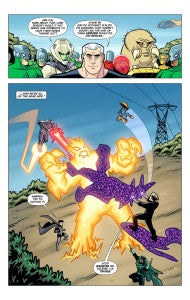 Roberson: I’d have to ask John, but I don’t think there was an intentional homage there. And those “mini logos” he drops in sometimes when a new character is introduced is all him. It’s always a pleasant surprise when the pages come back looking so amazing.

Culver: John is a wizard.

ComicBook.com: This book has a very Silver Agey feel to it, but it has something that both major publishers lack these days, which is a sense of history. The things that happened to Edison and his world, happened and there is weight and duration to them. Was that something that you thought could be taken away from the more modern years of Big Two comics?

Roberson: In my head, the tone of the book is actually Bronze Age, which was a time when superhero comics became a little more sophisticated in terms of narrative techniques and subject matter, but hadn’t yet gotten embarrassed about the sillier aspects of the Silver Age stories. But the richness of the back stories and the continuities is what appealed to me most about superhero universes when I was a kid, just jumping in the deep end and trying to work out from context who everyone was and what was going on. With EDISON REX, we’re making a very conscious attempt to engineer a structure that evokes that same kind of feel.

Culver: Legacy is a big theme running through our comic and we appeal to a certain type of reader that might feel left behind from constant reboots. Like I've said before, if the New 52 is the State of the Union then we're the Democratic Response.

ComicBook.com: ...Wait. Why did the robot grow up?

Roberson: He built himself an adult body, so he would fit in better with his friends, presumably. Dennis, was that the idea? 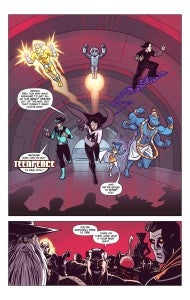 Culver: Yeah Tekno traded his teen body for an adult body. Just like the rest of his teammates (and everyone else.)

ComicBook.com: Can I say that I like the fact that Avatar is blue-skinned?

Culver: She is able to shape change into any of the Avatar forms taken on by Krishna. She's pretty cool.

ComicBook.com: I'm a fan of the absorption harness. Does it provide flight powers?

Roberson: My thinking that it can absorb and then manipulate all sorts of energies, and a “jet-pack” function is definitely in the mix.

Culver: Check your back issues, Burlingame! Rex used the same harness in issues 2 and he even used it to fly!

ComicBook.com: Is Edison going to worry that he has competition for L.A.R.V.A.'s attention?

Roberson: I don’t think that would worry him, no.

Culver: Rex will always be her number one if she can help it.

ComicBook.com: Actually the little romantic beats that don't go anywhere feel a lot like old team-up issues to me. I always remember somebody off of the X-Men flirting with somebody from the Avengers who just...wasn't having it. Was that something you echoed consciously?

Roberson: Something that Dennis and I consciously try to work in to these stories is the sense that there’s a whole universe out there, and we’re only seeing little bits of it at a time. We don’t even see all of the activities of our main characters, much less the walk-on guests. So not a conscious echo of those kinds of things, but more an attempt to suggest that these characters have ongoing stories of their own that we don’t see.

Culver: The flirting is all Chris. He ships all our characters.

ComicBook.com: Seems as though the tease of Cerebella from a couple of issues ago is already starting to come to fruition. Is there going to be a bit of a different feel to this book as things start to hit the fan? Up until now it's been mostly one-and-dones, with continuity kind of bubbling under the surface. Is that sustainable as all of these things start to come at Edison at once?

Roberson: I think we’ll maintain the self-contained structure of each story, even when the scale of the stories starts getting bigger. I like the challenge of it!

Culver: Even though things are typically done in one if you take the time to reread all 12 issues together you'll see we're telling a much larger story. It works on both levels.