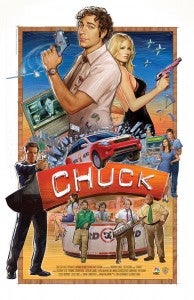 That headline's a little bomb humor for all you keeping score at home.

NBC's Chuck wrapped up its five-year run last night with an emotional two-hour finale. During its lifespan, Chuck was critically acclaimed and beloved by a group of fans just slightly too small to ever keep the show out of the cancellation danger zone.

Sound like any comics you know? But that's another story for another time.

Chuck starred Zachary Levi (who later came to fame with Disney's Tangled), was co-created by Josh Schwartz, the showrunner of The OC and Gossip Girl, and features some of the best guest-stars and villains in television, including Chevy Chase, Linda Hamilton and Timothy Dalton. It's written by geeks, for geeks in a way that's more accessible and believable than shows that seem to disintegrate into pandering and self-parody while trying to prove that they "get" the subculture. A well-acted and clever show, Chuck has been consistently one of the best programs on network television since it debuted in the months before the 2007 Writers' Guild of America strike that abbreviated many shows' seasons and sunk a number of promising new shows that simply didn't have an opportunity to find a big enough audience before TV briefly shut down.

There was, as early as the end of Chuck's first season, the very real possibility that the show would never see the light of day again but that was only the opening salvo in an ongoing series of false stops that saw the fan-favorite show claw its way back from the brink of cancellation year after year. Near the end of the second season, when rumors had it that the show was finished, fans of the series famously targeted Subway, a major advertising sponsor of Chuck, with a campaign whereby they bought turkey subs and then left 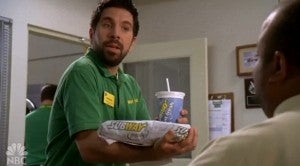 notes in comment boxes and on the Internet that they had been brought to the chain by Chuck. It worked. At the end of last season, though, it was announced that Chuck was indeed coming back--for one last time, and only for the thirteen episodes it would need to wrap its storylines up. Ultimately it did that (mostly), and gave the characters their happy endings (mostly), but it seems as though there's still story left to tell. Rumors of a Chuck movie will probably start among the hardcore fans soon, and our earlier assertion that the series would make for a great comic book follow-up seems even more pressing now.

Being even allowed the opportunity to wrap up an underperforming show was a courtesy that's nearly unprecedented in today's television landscape, and there were viewers and critics earlier this year that wondered whether NBC would keep true to its word as the quirky spy drama had huge difficulty finding viewers in its new, Friday time slot and ratings dipped to series lows. The show's small, ardent group of longtime fans appreciated it, though, and after years of crusading to keep the program on the air its conclusion this year was met largely with acceptance and a feeling of relief that at least the showrunners would get to wrap up the tale of the Burbank computer salesman who accidentally became the world's greatest spy.

Last night's episodes themselves were great character pieces with a finale that--not entirely unlike the late, great Arrested Development--had elements of playing the pilot against itself beat-for-beat. It was part of an overall theme of revisiting the triumphs of the past which pervaded the final hour of the Nerd Herd's last television outing. With Chuck back at the Buy More, driving the Herder, and even the brief appearance of a Wienerlicious, it was a greatest hits tour that felt welcoming without being too insular or uninspired. Including Jeffster, and even some elements of the pilot, into the climax was inspired lunacy.

Plot-wise, the finale had moments where it felt a little too much like a snake eating its own tail--but that's been part of the premise for years now, with each subsequent almost-cancellation forcing the writers and showrunners to constantly create a new jumping on/jumping off point. There came a point in the history of the show where the question stopped being whether and how Chuck and Sarah would end up together and started being into whom the Intersect would be downloaded next. Bad guys wanted it for bad things and good guys, invariably, couldn't handle what it did to them--except for Chuck, who always knew what to do with it. Whether it was because he was "the perfect specimen" for the experiment as they claimed in the earliest days or just because his father built it. Toward the end, though, they largely jettisoned the "he's the only one" mentality in favor of having constant "faulty" Intersects that would malfunction in some way that only Chuck's team could fix. It made everything feel like a finale, since every midseason- or season finale would somehow track back to the first season, to Orion and the origins of the Intersect. And it sometimes made the next episode feel cheapened--like a problem was being manufactured out of thin air, since Team Bartowski had so ably handled all of the problems last time. Couple that with an unresolved ending which failed to pick up on a couple of plot threads that could have helped to resolve it and you're left feeling as though the writers' room may have been a little rudderless at times.

In the end, though, the final hour felt like one of the great television finales from the past--like the end of Cheers, it marched the tropes of the series gleefully across the screen, and like the last episode of Twin Peaks it left viewers with not a true conclusion but more of a new status quo. And along the way, almost every major surviving character got to make an appearance. Even Subway.

CHUCK Goes Out With(out) a Bang