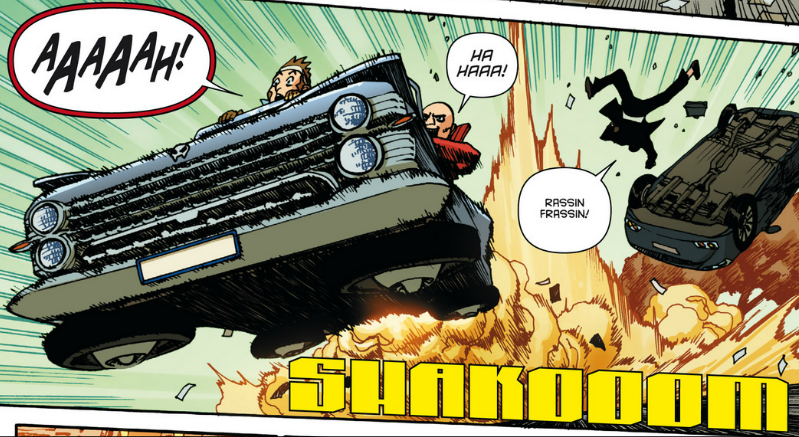 I was one of the first (perhaps the first, per a tweet from Greg Pak) backers of Code Monkey Save World and, throughout the Kickstarter campaign, covered its evolution quite a bit. The premise seemed like a lot of fun, and everyone involved--writer Greg Pak, artist Tak Miyazawa and musician Jonathan Coulton, whose work was being adapted in a strange and unprecedented way--was someone whose work I enjoyed and admired.

And the investment I made--especially on a reporter's salary--was probably more than I should have, but as soon as I saw the Kickstarter video (see below) and concept art, I fell in love with this project a little bit.

Of course, the problem with doing that is that there's always the chance of a steep price to be paid for nothing at all. I've never seen any credible, objective numbers as to how many Kickstarter campaigns don't actually generate the product they set out to, or make one that's materially less awesome than people hope, but the number isn't zero, and that's too bad.

It's also nowhere near as big as a lot of people would have you believe. As someone who's supported a number of Kickstarter campaigns, my anecdotal evidence is all that I have to fall back on--but of the thirty or so I've supported, I believe there was one campaign that never sent me the items I paid for. That's about as good a batting average, if not better, than I get when I order from third-party sellers on Amazon and low enough that the percentage falls into the "people are fallible" range. 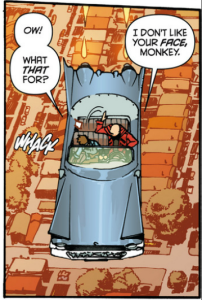 In any event, Code Monkey Save World is exactly what's supposed to happen with Kickstarter. Fans were able to contribute to support a work that wouldn't otherwise have found a home--and in this case, the fans were enthusiastic enough to tack on a bunch of cool bonus features along the way in the form of stretch goals--and the work, in return, has been turned around in a fairly speedy timeframe.

With the release of Code Monkey Save World #2 coming soon, we Kickstarter contributors have already seen the issue. It's delightful fun, and fulfills the promise of the original project--to bring the weird and wonderful cast of bizarre characters Jonathan Coulton has created in his music to life--perfectly.

The story is clever--if a bit complex, given the sheer number of moving parts, the huge library of characters and all that stuff Pak is trying to cram into a script in case he doesn't find time to do more of these (after all, he's writing about 1/4 of all comics on the market right now, from Action Comics and Batman/Superman to Eternal Warrior and the upcoming Turok: Dinosaur Hunter.

There's also Tak Miyazawa's art, which is some of the best stuff of his already-pretty-awesome career. It's strong, beautiful and most importantly for the nature of this story, it's emotive. Characters are speaking with their eyes and their body language, and we're taking away a lot more than people are saying...which is good, because other than the titular monkey, almost nobody is actually saying exactly what they mean in this story. There's a lot of reading between the lines, a lot of emotional baggage and a lot of guesswork going into who has what motivations, exactly.

Everyone at every level delivers a triumph here; it's important that colorist Jessica Kholinne and letterer Simon Bowland get a shout-out, too; there is nothing worse than having a book that has a ton of promise turn out looking shabby and unfinished because the colorist or letterer aren't the right hands for the job. They're often thankless gigs, where the only time reviewers notice you is when you screw up, but here their work really sticks  out.

Kholinne, in particular, deserves a ton of credit for helping to shape the tone of the book. the palette she uses gives a sense of calm--it keeps the book light and fun, even as some pretty heavy stuff is actually going down. It's a subtle, tricky thing she's doing and had she dialed that in just five degrees wrong, it would look terrible--but instead her colors perfectly suit Miyazawa's art style. 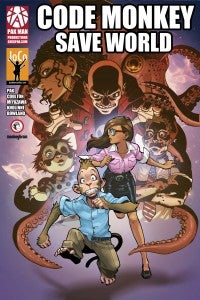 Bowland's work particularly stands out in the as-yet-unpublished #2. There's a reliance on sound in the issue that would make a lesser letterer really stick out. Again, the nature of this series is that you have to strike a balance between the serious stakes and the comedic tone--and that's something Bowland pulls off admirably. Even #1 had a bit of that going on, as you can see from the thumbnail above.

More than all of this--or at least as much, as it pertains to future Kickstarters and the like--I've received everything I was promised so far. They've been giving Kickstarter backers early access to the comics as well as downloads of literally anything that already existed before the Kickstarter campaign launched. Did you contribute at a level that gave you Coulton's entire musical catalogue as a high-quality digital download? You got it shortly after your payment went through.

So bear with me. This was--a bit--a review of a beautifully-rendered, cleverly-written comic that's as much fun as anything else you'll read this year. More than that, it was a review of Greg Pak and Jonathan Coulton's Kickstarter campaign--which came through with flying colors. This is exactly how crowdfunding is supposed to work.

Code Monkey Save World: How Crowdfunding Is Supposed To Work