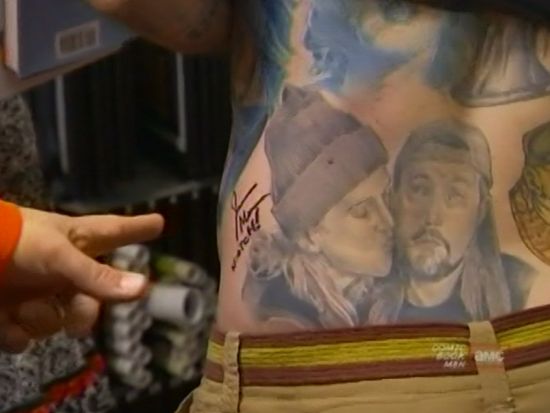 On the “Tough Sh*t” episode of Comic Book Men, a customer comes into the Secret Stash wearing a custom made costume of Mecha-Kong from the 1966 animated series The King Kong Show. The customer is hoping to sell the suit for $1,100, so the Secret Stash guys have him stress test the suit by smashing boxes and plastic army men. Even though Walt is impressed by the show the customer puts on, he passes on buying the suit.

Another customer comes into the Secret Stash with original Teenage Mutant Ninja Turtles artwork. The customer says he got the artwork from Kevin Eastman, who indicated it was a potential cover for the first issue. The customer wants $20,000 for the artwork, but an expert only values it at between $2,000 and $2,500. Even though Walt is interested in the piece, he is unable to agree on a price with the customer.

Kevin Smith holds a book signing at the Secret Stash, and Jason Mewes works security. Ming tells Jason that there are over a thousand people that showed up for the signing, so he needs to cap the line. During their podcast, the Secret Stash guys talk about the Star Wars Holiday Special, which introduced Boba Fett.

A customer comes in looking for some of the original seventies KISS comics. The first issue was famous because KISS members poured some of their own blood into the ink used to print the comic. After some negotiation, Walt agrees to sell the first two issues of the KISS comic for $200 total.

A customer brings in a 1975 Marvel World Playset, which rekindles special memories for Walt. Because Walt is in an emotional state, he calls Kevin Smith over to negotiate. The customer asks for $600, and Kevin buys it as a gift for Walt. As the book signing winds down, Kevin Smith and Jason Mewes give the last guy in line a $100 gift certificate to the Secret Stash.