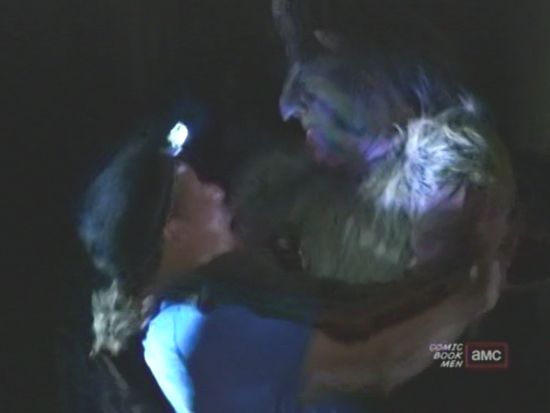 In the “Ghostbusting at the Stash” episode of Comic Book Men, a woman comes into the Secret Stash trying to sell some Star Trek memorabilia. However, the really interesting part is she says she’s trying to sell it because it belonged to her deceased father, who she believes is now haunting her because of his connection to the stuff.

The woman is also a paranormal investigator, and she offers to bring in her equipment to check out the Secret Stash basement, which Walt thinks might be haunted. She asks if there is an entity in the basement to give them a sign, and there is a sudden, mysterious noise. The woman’s EMF detector lights up, and she tells Walt the entity is reading comic books in the basement.

Walt Flanagan tells the others the origin story of the Jersey Devil. Rob Bruce, pop culture expert, tells the Secret Stash crew that he actually saw the Jersey Devil. Walt convinces Ming to go out with him that night to hunt the Jersey Devil, then he whispers to Rob Bruce to come out there as well. While Walt, Ming, Mike and Bryan wander through the dark woods, they hear something running. Suddenly, Rob Bruce dressed like the Jersey Devil jumps out of the woods and scares Ming half-to-death.

Fortnite: When Does Chapter 2 - Season 6 Start?

Genshin Impact Has Made an Absurd Amount of Money