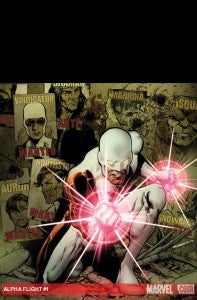 Well how do you do, comic book readers! Hope you're getting ready for the full summertime fun that's to be had! The beach, the mountains, the city, picnics, baseball, and of COURSE comic books! What else makes summer reading better than a big stack of your favorite heroes, villains and amazing story lines? Let's start things off this week with a look at Marvel and the return of a super-team that just keeps coming back for more! Writers Greg Pak and Fred Van Lente bring Canada's Alpha Flight back in Alpha Flight #1, the first issue in a new maxi-series that ties in to Fear Itself! Be there as the original team returns! Several big X-Men books arrive this week, with X-Men #13 bringing us the next parts of the "First to Last" story arc. X-Men: Prelude to Schism #3 keeps building to the big X-Men event of the year, as readers get more into the heads of Cyclops and Wolverine!

Marvel brings other Fear Itself tie-ins, with this week's release of both Invincible Iron Man #505, where Tony Stark will have to decide if he can avoid a meltdown that paralyzes him from action, and Avengers #14, which promises a major shakeup to the Avengers roster, the likes of which haven't been seen since "Avengers Disassembled"! Captain America Corps #1 brings together Captain America, U.S. Agent, American Dream and another Captain America for this new series, promising patriotic exploits! Not to be outshone, Hulk #35 sees Big Red taking on a mission from none other than Steve Rogers himself! 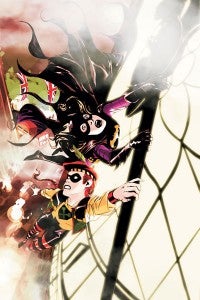 DC Comics brings us another chapter in the ongoing adventures of the newest young girl to wear the mantle of Batgirl, as Stephanie Brown battles on in the pages of this week's Batgirl #22. Batgirl teams up with Squire for an adventure in London, with time, literally, stolen away! Will Batgirl get it back? Read on! Batman #711 brings Two-Face back in action to terrorize Gotham once again while over in the pages of Teen Titans #96 it's up to Beast Boy, an original Titan, and Solstice, the newest Titan, to save the team! Several limited series tying in to Flashpoint are released this week, with Wonder Woman and the Furies #1 leading the way with Legion of Doom #1 and Deadman and the Flying Graysons #1 all promising intriguing twists on well-known characters!Rounding out the headliners for DC this week is Superman/Batman #85, which sees the beginning of a new arc where Batman is framed for murder and Superman must investigate! Speaking of super, look for Supergirl #65, which also flies into stores this week!

Dark Horse comics this week bring part one of a two-issue story with Conan: Island of No Return #1, written by Ron Marz and penciled Bart Sears! Image Comics also has plenty in store this week, with one of the biggest releases being Invincible #80, with Dinosaurus returning in this issue! Volume 14 of The Walking Dead is released in trade paperback this week, collecting issues 79-84. Catch up on all the undead hijinks and horror in this book! Be on the lookout this week for Witchblade #145 also, and hey, look, if you like Ron Marz, he also writes this as well! Don't forget to pick up Spawn: Origins Volume 11 in trade paperback, too!

Boom Studios brings issue three of Malignant Man onto store shelves this week as well! This latest sci-fi thriller has alien parasites, Area 51 and intrigue! Pick it up! Also, 28 Days Later #24 is the LAST ISSUE of this series! It's the end of the line for Selena and Clint's long, harrowing journey, so don't miss the concluding chapter in this gruesome series! If you prefer lighter fare, Boom also has Mickey Mouse and Friends #309 or perhaps the adventures in Darkwing Duck #13 are more up your alley!