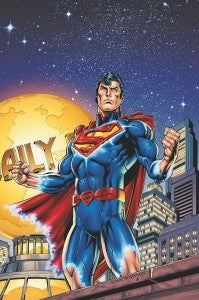 Last week, popular fake-news website The Onion ran a story that reported that an "economically healthy" Daily Planet had become so unrealistic that it was pulling fans out of the reality of the Superman mythology.

Said the publication, "While they acknowledged that enjoying the adventures of a superhero who can fly, lift a bus over his head, and shoot beams of intense heat from his eyes requires some suspension of disbelief, longtime fans told reporters they simply could not accept a daily metropolitan newspaper still thriving in the media landscape of 2012."

It's a pretty hilarious article, actually, and while there are some inaccuracies (Newsroom layoffs have been an intermittent issue in the Superman comics since the mid-‘90s, for example, and Lex Luthor did buy the newspaper at one point, but was forced to sell it when he ran for President as his advisers felt it constituted a conflict of interest), the overall notion that a thriving Metropolitan newspaper is nearly as unrealistic as a man who can change the course of mighty rivers is probably not an entirely unfair position to take.

So, of course, we took the opportunity presented by San Diego's Comic-Con International to talk briefly with Superman writer/artist Dan Jurgens about the issue. He saw the humor, but said that there's no reason that The Daily Planet--recently bought out by a powerful news syndicate anchored by a massively successful cable news division--can't still thrive.

So that's the verdict: From one fake newspaper to another: Back off, buddy!

Comic-Con Postgame: Dan Jurgens on The Onion vs. The Daily Planet