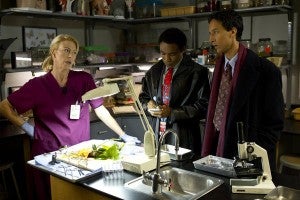 NBC has released a first look at tomorrow's much anticipated episode of its cult-favorite sitcom Community. Officially titled Basic Lupine Urology (in keeping with the show's tradition of naming every episode after a course at Greendale), the episode has become known colloquially to fans as "The Law & Order episode," and this cold open shows exactly why. The show's need to explain away why it's doing certain theme or homage episodes has seemingly disappeared almost completely as the characters of Troy and Abed have developed. Here, they're basically ushering in the special credits and have been seen in various publicity photos (including the one at right) dressing the part as well. The whole world is their Dreamatorium and you're just living in it. Community airs tomorrow at 8pm/7pm CST.