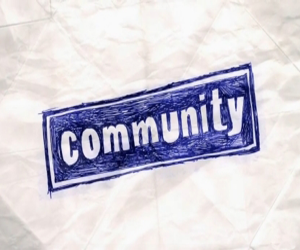 Six seasons and a movie! ...Well, at least the rest of this season. Then we'll see. Just two days after denying rumors on Twitter that his long-benched geek-friendly sitcom Community would return to the airwaves on March 15, TVLine is reporting that showrunner Dan Harmon has announced (also via Twitter) that the gang from Greendale will return to NBC on March 15. "What you call 8:00, we call home," Harmon tweeted. "Community returns to Thursday nights on March 15th." Back in December, Community was facing low ratings when it was removed from the winter schedule to make room for the return of 30 Rock to the schedule. When the show returns, 30 Rock will move to the 8:30 time slot. Parks and Recreation, which currently occupies the 8:30 slot, will have a scheduled hiatus and return on April 19, finishing out its fourth season in the 9:30 slot currently occupied by freshman series Up All Night, which has a shorter season and was always intended to end in April. When someone claiming to have worked on the show briefly told members of a Community Facebook group this weekend that Community would return on March 15, Harmon shot back on Twitter, asking, "Who 'works on a show for 2 episodes' and why would they have more info than anyone else?" While that seemed to close the issue, fans observed at the time that IMDb also had the next Community episode slated for March 15 at that point. TV By The Numbers recently ran a story suggesting that Community's ratings look better in hindsight, given the poor performance of NBC Thursdays recently, than it did when it was actually on the air. With a fourth season still uncertain, the show's performance one it returns may determine whether it's renewed, which many pop culture bloggers and sites that specialize in that sort of thing are calling a toss-up with a slight advantage to Community due to NBC's weak crop of new shows.