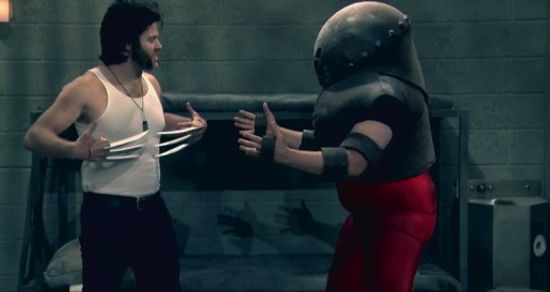 In a fan correction segment on Monday night's Conan show, Conan O'Brien was accused of mispronouncing the word "juggernaut," which happens to be the name of a popular X-Men villain. In order to prove that he did no mispronounce "juggernaut," Conan showed a clip from the director's cut of X-Men 3: The Last Stand. In the clip, Juggernaut squares off against Wolverine on Alcatraz island. After Wolverine pronounces Juggernaut the way that the fan claimed it is pronounced, Juggernaut corrects him saying, "Actually the origin of the word is Hebrew. It refers to the unstoppable force that is the Jewish people. Of which I am one." After Juggernaut says something in Hebrew to prove he's Jewish, Wolverine responds in Hebrew, claiming that he is Jewish as well. After learning they are both Jewish, Juggernaut and Wolverine decide to forget the whole mutant war thing. While we don't remember that particular scene from X-Men 3: The Last Stand, we've embedded the clip that Conan O'Brien aired on his show last night as proof.