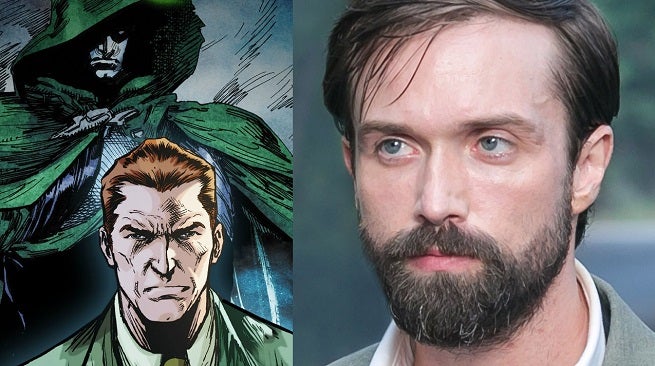 Tonight's episode of NBC's Constantine introduces viewers to Detective Jim Corrigan, a hard-nosed, hard-drinking New Orleans cop who's not exactly by the book.

Earlier today, we spoke with actor Emmett J. Scanlan about bringing Corrigan to -- ahem -- life, but many viewers who don't read the comics are probably wondering just who he is.

A quick trip to the DC Wiki usually helps with these things -- but in the case of Corrigan, there are two police officers in the annals of DC history named Jim Corrigan. And that can't be somewhat confusing.

Where the two are connected is through a powerful, mystical being known as The Spectre.

The Corrigan played by Scanlan is a character created by Superman co-creator Jerry Siegel in 1940. He was a police officer shot in the line of duty, but rather than die, his soul merged with The Spectre and Corrigan became a physical manifestation of God's vengeance on Earth.

A bit more brutal than the average hero, many Spectre tales saw the character killing villains -- often common thugs -- in ironic ways. An animated short film released as one of the DC Showcase shorts captured this aspect of him pretty well.

Over the years, different writers have handled The Spectre differently, playing his humanity up or down. Sometimes he struggled with the terrible things The Spectre does to people, while other times he seems to almost enjoy it.

Ultimately, Corrigan was allowed to pass away and go to Heaven. That left The Spectre without a host, resulting in a story called Day of Judgment, when jockeying began for the power of The Spectre among a number of unsavory celestial beings. 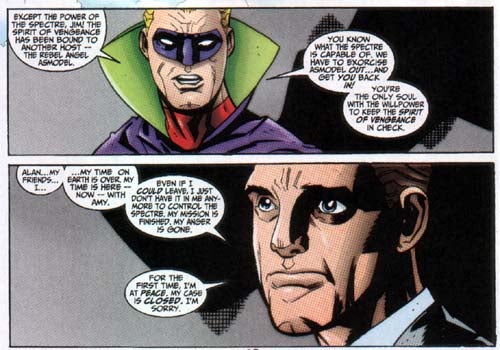 Eventually, a small group of superheroes went to Heaven and tried to persude Corrigan to return and reclaim The Spectre, but he refused. The end result was that Green Lantern Hal Jordan -- then suffering in Limbo for reasons we won't get into here -- was bonded to The Spectre as penance for sins he had committed. They were later attributed to an ancient fear parasite and the new host of The Spectre became Crispus Allen, a man who had been murdered...by Jim Corrigan.

No, different Jim Corrigan. Remember we said there were two? This one was a corrupt Gotham cop in Gotham Central, the series that most heavily inspired Gotham.

In the New 52 -- the comics universe created by DC Comics' line-wide 2011 reboot -- Corrigan is back and is once again The Spectre. He's more rage-driven in this version, and it's Corrigan who seeks wrath while The Spectre's mission is merely justice.

In a recent story, he was sent for John Constantine, charged with punishing the petty dabbler in the dark arts for his lifetime of sin, which included the death of Jim's friend Chris. Constantine managed to convince Jim to let him continue his mission against the world's evil sorcerers, but Corrigan vowed that he will return to collect Constantine's soul upon his death.

Constantine: Who is Jim Corrigan?

Call of Duty: Warzone Streamer Nickmercs Reveals the Best SMG Everyone Should Be Using