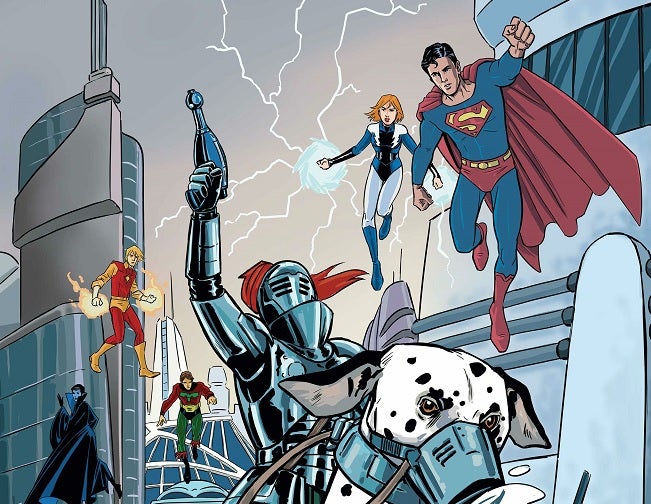 Nearly thirty years after the last time fans saw the classic Legion of Super-Heroes begin their series of reboots and relaunches with Crisis on Infinite Earths, writer Stuart Moore and artists Gus Storms, Peter Gross and Mark Farmer will explore what many consider to be the high water mark of the team's existence this April and May in Convergence: Superboy and the Legion of Super-Heroes.

Drawing inspiration from the stories of Paul Levitz and Keith Giffen, the storyline will feature, according to Moore, "A little romance, a big super-battle, and some armored guys riding giant dogs. You know—comics." 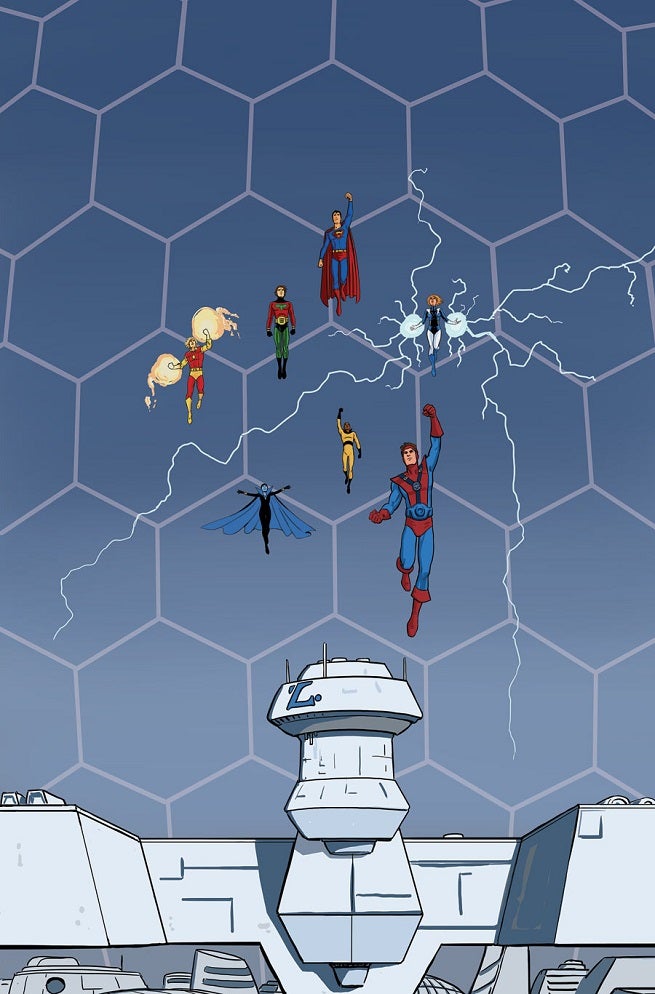 We've seen that Booster Gold will run afoul of Superboy and the Legion of Super-Heroes in his second issue. Will we see any of that in your own title?

No, that takes place before our story.

Your first issue has Superboy and the Legion facing off against the Atomic Knights. Do you feel like it's a little easier when the invading horde is a group that the average reader has less of an emotional attachment to, as opposed to, say, the Kingdom Come characters where a lot of people don't want anything bad to happen to that world, either?

I hope that, by the end of the story, the reader will have some sympathy for both groups. Most of that comes together in issue #2, though. Issue #1 is mostly the Legion’s story—Superboy’s, in particular.

The Legion has been off the table for a while. Is it as exciting for you as it is for the fans to finally have a chance to give them a spotlight for a bit?

Yes, I love the Legion. I wrote a few stories back during the Waid/Kitson era and I’m very happy to return to them. The Legion, to me, is the craziest idea in comics: two dozen superheroes in the future! You’d have to be insane, or a little kid, to come up with that concept. But that’s what makes it so much fun.

That said: Our focus here is pretty strongly on Superboy. This is the original, Clark Kent incarnation of the character. He’s almost but not quite an adult here, and he’s trapped a long way from his home. He’s always loved his visits with the Legion, but it always seemed like a little vacation: He could zip into the future, have an adventure with kids his own age, and then fly home again. Now that isn’t an option, and he doesn’t know if he’ll ever make it back to become Superman. 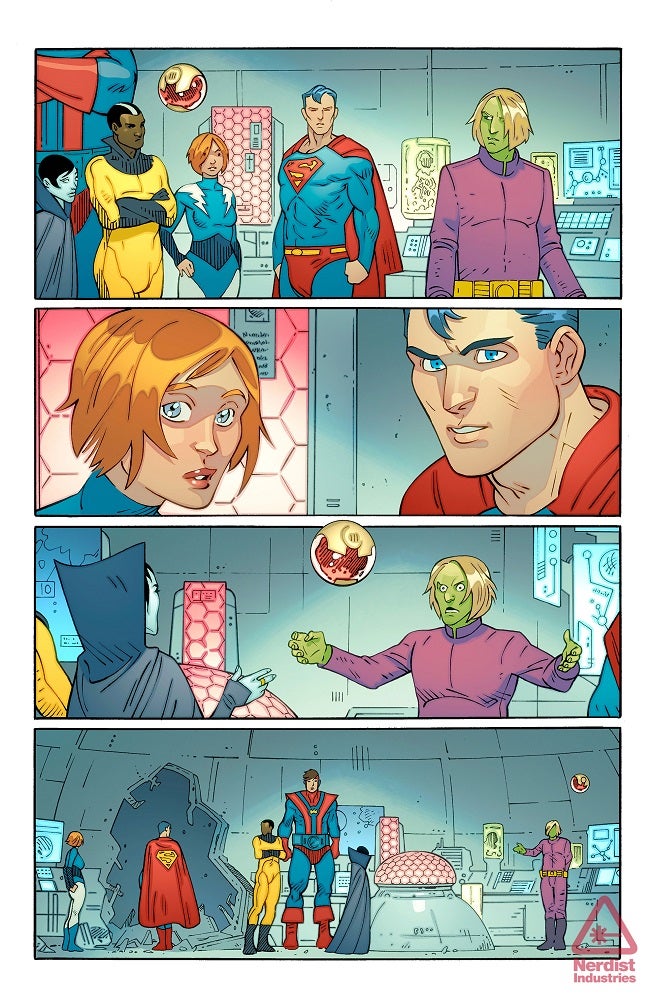 What's the appeal of exploring this particular iteration of the Legion?

The Legion has had a lot of good periods, but the Levitz-Giffen team really brought it to new heights in the ‘80s. The characters were strong but vulnerable; the team was huge but there were spotlights on individual members, which really made them seem like real people. It’s a great point in the team’s history to revisit.

That said, obviously the Crisis on Infinite Earths was, in many ways, the beginning of the end for the Legion as one of DC's biggest and best-selling properties. We know that Supergirl is eventually going to become aware of her post-COIE fate. Will you be dealing in-story with the fact that even if they “win,” they're still going to get rebooted and Superboy will be gone?

No, that’s not within the scope of this miniseries. We only have two issues, and we all agreed the important thing was to tell a compelling personal story. There were actually characters I considered using and discarded because their situation was too complicated — Sensor Girl, for example.

Is there a particular character or a couple of characters who you've particularly enjoyed writing in this miniseries, or a character dynamic that's been interesting to explore?

Yes, there’s a romance here that I hope will come as a surprise. It’s one of those things that you never saw before, but it just seemed perfectly natural given where the characters find themselves. I also came up with a few hopefully-clever ideas for Wildfire and Colossal Boy.

The visuals of the Atomic Knights mounted on their dalmatians is one of those just awesome, batshit crazy visuals in comics. There's a lot of those in Convergence. Did you ever stop and go, “Will these things still work?”

No, that’s the artists’ problem. Seriously: I think almost any visual can work in comics if the tone is right. One of the things we were told when we started the Convergence stories was: Have fun! That’s really nice to hear, and it gives you a lot of leeway. 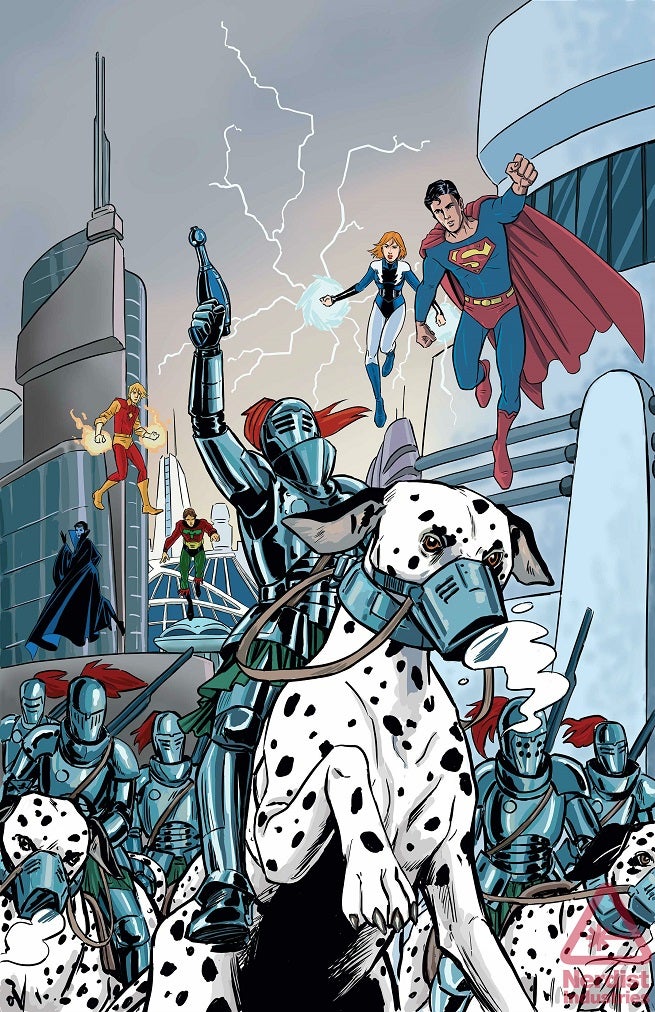 What do Gus and Peter each bring to the table, in terms of translating the world of the pre-Crisis Legion?

Gus is particularly strong on locations. I sent him a lot of reference on the Keith Giffen version of Metropolis, and he did a gorgeous job bringing it (back) to life. Gus and I work together regularly on our Image book EGOs, so we have a pretty smooth working relationship going. Gus also took a lot of care with the designs of the characters.

Peter excels at mood and character. There are two quiet pages in issue #2 that are among my favorites in all the comics I’ve written. Peter has mostly drawn Vertigo books, but not many people know that he’s also a gigantic Legion fan.

I should also mention Mark Farmer, inker/finisher, who really pulled the two issues together.

I know that the Brainiac/Brainiac 5 connection is one that's been explored occasionally...but is it something that you'll play with a little given the nature of Convergence's threat?

There are hints, but that’s about all I can say.

When you're writing a project like this, where they're bringing back “dead” worlds...is it an ending, or a new beginning, in your mind

That’s a good question. We approached it as both: another look at these characters, and a fresh take on them at the same time. As I wrote the story, it started to seem like something a little different: a moment in time, a little dream, a story that exists outside of continuity but still matters to the DC Universe. A little romance, a big super-battle, and some armored guys riding giant dogs. You know—comics.