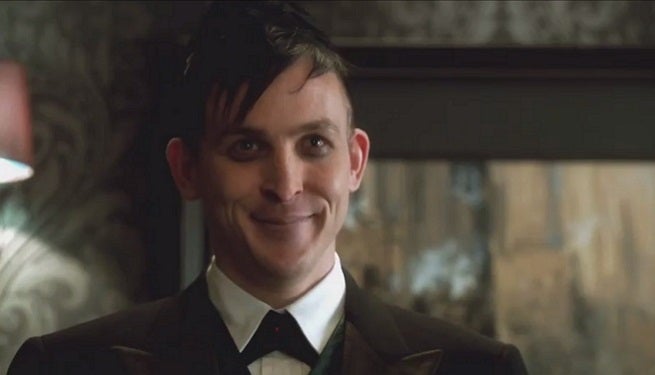 For a couple of days now, a theory has been floating around online that Robin Lord Taylor, currently playing Oswald "The Penguin" Cobblepot on Fox's Gotham, is in fact playing The Joker.

It's an odd one, and it's got some holes in it, but it's an interesting theory and it's the kind of thing that's reached that level of virality where people keep pointing it out to us, saying "Have you seen this?"

The theory, which started on Reddit, claims essentially that the Penguin of Gotham acts and looks more like The Joker than he does most traditional depictions of Penguin. He's neither particularly short or heavy, they reason, and he's much more prone to seemingly random, almost gleeful killings than The Penguin, who is generally thought to be a more tactical villain.

So, the reasons, eventually this guy will become The Joker and somebody else entirely will be Penguin.

Cobblepot (Taylor) would then do his business as the Red Hood, setting him up to become Joker and giving him a helpful disguise until then.

The first and most obvious problem here is that it's nearly impossible to imagine that by the end of the season, Cobblepot won't encounter Fish Mooney again, at which point the logic of that last bit more or less flies out the window. There are ways it could be done, sure -- say, he reveals himself, kills her and then has an accident that scars him, turning him into The Joker -- but it's a heck of a stretch. Probably much more of a stretch than "the writers are doing a different Penguin than this Redditor is used to."

There are some other faulty assumptions, too, like thinking that Cobblepot is more or less above brutality and that he's not a "gangster," which runs contrary to most interpretations of the character, including the one Taylor has said he was given to study, Gregg Hurwitz's New 52 Penguin: Pain and Prejudice miniseries.

Crazy Gotham Theory: Is The Penguin Really The Joker?