After Marvel's The Avengers hit theaters last year, many fans wondered when we would see the next attempt to bring Hulk to the big screen in a solo film.

Well, after a brief and somewhat nonsensical cameo in Iron Man 3, The Hulk still doesn't have a movie on the schedule--and the character's long-gestating TV series has even fallen by the wayside, with prospective showrunner Guillermo del Toro admitting earlier this year that it was effectively dead.

We'll settle, then, for animation. Hulk and the Agents of S.M.A.S.H. is coming soon to Disney XD, casting Bruce Banner as the leader of a group of gamma-irradiated government super-agents.

Better yet, how would you like to see Lost co-creator Damon Lindelof, writer of films like Prometheus and Star Trek, take on the Green Goliath? Well, that's happening, too--kind of. 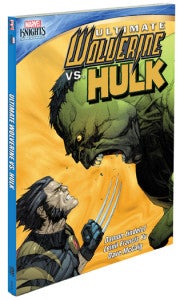 In the film, Dr. Bruce Banner (a.k.a. the Hulk) has been presumed dead since his execution, following his murderous rampage through Manhattan as the Hulk. But when reports start cropping up of an unidentified creature appearing around the globe, Nick Fury begins to get worried. Not because Banner can turn from man to unstoppable monster in seconds, but because Banner’s existence is the one secret that can bring down Fury. So Fury turns to the only man he can trust: Wolverine. And he’s only too glad to take care of Banner – by any means necessary.

An exclusive behind-the-scenes bonus content feature provides an intimate and retrospective look at the development and production process of this amazing story. Marvel Knights Animation remains true to the heritage of panel-by-panel graphic storytelling, boasting groundbreaking illustrations, sensational soundscapes, and of course, the explosiveness of the mighty Marvel universe. Behind every image and every word lies the genius of Marvel’s celebrated creators.

The Ultimate Comics universe has served as the inspiration for much of the Marvel Cinematic Universe, of course, so while we may never see Wolverine in an Avengers movie, here we'll get to see him interact with the Samuel L. Jackson-inspired take on Nick Fury. In the comics, Wolverine's first appearance was in an issue of The Incredible Hulk, in which the Canadian mutant was an antagonist for Ol' Jade Jaws.

It's well-timed, too; Shout! Factory just had a hit in the form of Wolverine: Origin, while Leinil Yu is currently one of a number of artists rotating on Indestructible Hulk for Mark Waid and Marvel Comics.