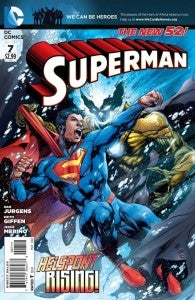 With the release of Superman #7 this week, Dan Jurgens returns to one of the titles he's most closely associated with for the first time in more than ten years, this time joined by co-writer Keith Giffen (with whom Jurgens worked on their recent Green Arrow run as well as an issue of Booster Gold on which Giffen was a guest artist before the DC relaunch) and artist Jesus Merino, the sole holdover from the title's first six issues, which drew criticism for pacing but got generally good reviews and were consistently in DC's top ten monthly sellers.

In the first in a series of monthly interviews, Jurgens joins us to talk about the issue, about how this run is different from his previous take on the character and about setting the stage for the world Superman will exist in after an initial arc where George Perez focused pretty narrowly on the characters needed to tell that first story.

Back in November, you tweeted that "Every comic I've drawn was with the same mechanical pencil since '85. It broke today, ten minutes into page 1 of Superman #7." Has that changed your process at all? it seems unlikely you could replace it with an identical model all these years later.

Dan Jurgens: Not at all. It just seemed weird that as soon as I started on Superman-- again-- the same pencil I used to draw every other issue broke.

Had I taken that as an omen, I'd have fled to the hills.

Have you tried the George Perez pencil? That might add some nice continuity to the book...! 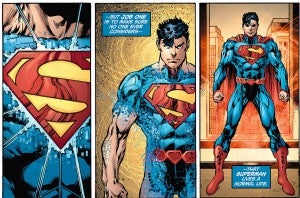 Did the new approach to Superman's costume come from you, or was that part of the George's original pitch that he just never got around to using?

Keith and I were talking on the phone at one point and I asked if he had any idea how Superman could possibly wear armor, not to mention bigger boots, under his clothes. So I shot him the idea of building it around the costume itself, since we were dealing with a new one anyway. We kicked it around for a bit and the result is on the page.

Did you already know when writing the issue--or was it just serendipity--that Grant was going to make the costume somewhat "dynamic" in its nature over in Action Comics? The way it appears around Superman makes total sense when you consider that it altered itself to suit Superman when he first put it on.

When we first ran the tech idea past editorial, they ran it past Grant and everything was ducky. Seems we were thinking somewhat along the same lines and it worked.

It's interesting that one of the things you've got here is the statement that Superman makes hiding the mere possibility of a secret identity a priority. In the past, I've always had the impression that he relied on that to occur fairly organically. Is that a New 52 tweak in response to the idea that a pair of glasses is kind of a silly way to hide your identity?

He HAS to work at it. The world we live in now is so invasive, with cameras everywhere, with the ability to snoop functioning at a breakneck pace, that anyone with a secret identity would have to work at it.

And for Superman, the easiest way is to lead people to believe he's Superman 24/7. That's all there is.

In the days before the New 52, you drew both Green Arrow (whose book you recently left) and Superman. How is it different working on these familiar characters in the context of the new DC Universe?

Well, the obvious differences are the general changes in costume, appearance and age. Beyond that is my general desire to open things up a bit more visually, while retaining the idea of good storytelling.

And, of course, a change in inkers, like Jesus Merino here, who's doing a fabulous job, adds to that.

You drew the pre-Byrne and post-Byrne Superman differently in Booster Gold (Volume I). I noticed that in some of these panels, Superman looked a big more lantern-jawed, in the way that the Bogdanove, McGuinness or Shuster type of artists might have drawn him in the past. Was that a style choice for New 52 Superman or just something that happened as a result of a new inker?

I was going for a bit more of an angled look, as I think that makes him look younger. I think he's actually a bit less chisled than what I did in the past.

You've written your fair share of "cosmic" stories and big ideas, but really I mostly think of your work as being pretty character-driven. Does working with a "big ideas" guy like Keith dramatically change what your go-to instinct is in terms of how to tell a particular story?

I generally reject the notion of who comes up with "big ideas" versus "small ideas". That tends to isolate things a bit too much and the creative process is more organic than that.

The goal is a good story that tells something appropriate for Superman, which is often big in scope, while also offering character definition and progress. Again, that can happen through big and small story elements. 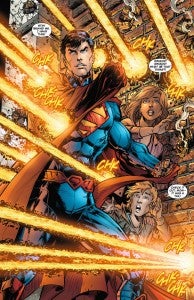 On the art side, the first page of this issue may have broken your pencil, but it came out looking great. It's far and away the best chance you had to show off. Was it important to get your visual "take" on the new Superman out there right away?

What are the major differences in the way you depict Superman in the post-Flashpoint universe as opposed to the pre-Flashpoint DCU, costume aside?

Aside from the costume differences, he's a little lighter-- a bit more streamlined and younger.

For those of us not well-versed in the history of Helspont and other WildStorm characters, have these bull-robot things appeared before, and/or are they a reinvention of something that Helspont used to use?

You had said in interviews--and at the DC All Access: Superman panel at NYCC--that you planned on creating new villains and new challenges for Superman. We've seen that in the solicitations, but the first arc pits him against a villain that's not new, just new-to-him. What happened there?

Well, I think you'd also have to say that Helspont is new to the entire DC Universe.

As for what happened, DC was making an effort to include Helspont in the wider universe and felt that Superman, from a power standpoint, was a capable adversary. We were happy to step in and make it work.

The difficult choices that people have to make in the DC Universe in terms of how they view Superman have been pretty well-established by now--but the "publicity whore" angle hasn't really been explored much. Obviously we saw it with Booster in the past--a character both you and Keith are associated with. Will we see that more than once or was it just a throwaway line?

I think that one of the things I've tried to communicate, both in the Justice League International and now Superman, is that the public doesn't view these heroes with any one, single, pervasive attitude.

He is an alien and no matter what he does on behalf of the world, there will always be a segment of people who are suspicious of his motives. "Yeah, he saved us from that alien race. But how do we know he wasn't just keeping them away until his own people move in?"That doesn't seem possible in America any longer-- not in any real sense anyway, so why should it happen with regards to any hero, even Superman?

Has Helspont always had a magical element or is that new? I always just thought of him as an aliendictator-type.

We tweaked Helspont where appropriate.

Is there any special reason for the characters that Helspont makes appear during his monologue?

Only as a reference point.

One last nitpicky question: Is Lucy Lane blind again or all better again?

Lucy's sight is back.

In reviews and such, a lot has been made of Superman's internal monologue--the idea that his voice retains the "Superman" feel while still managing to incorporate humor and personality that feels younger. was that a conscious choice?

By all means, yes. This Clark is cleary younger than the Clark I would have worked with before and certainly more... informal.

"Informal" is an interesting word choice. Do you think one of the big differences in terms of how Superman operates now as opposed to before Flashpoint is that he hasn't spent the last decade as the de facto leader of the metahuman community? The field general part of his voice is kind of gone, isn't it?

No, because I don't think his voice is gone in any way, shape or form. It's the audience and their attitudes that have changed. 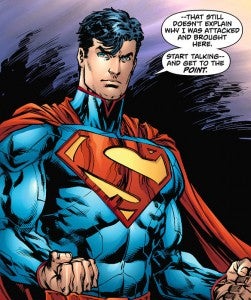 For my money, Superman is still a consumate leader. He commands respect not just because of his power, but because of the way he does things, his sense of integrity and for what he doesn't do. (In other words, he lets mankind determine its own path.)

But the difference is that, just as our society is more polarized today, so it is in the DCU. People may not fall in line as they did before.

That said, do you think the field general part was ever entirely appropriate? To quote (Batman by way of) Geoff Johns, Superman is meant to lead by inspiration and example. That makes for a great President but not necessarily a great commanding officer.

Well, I suppose I could interpret that to mean that Batman is more of a tactician and strategic field general and I'd agree with that.

And, yes, Superman is more of an inspirational figure.

But when I look to leaders, they aren't the rah-rah, make-a-speech types. They're the guys who get it done with a sense of quiet determination and resolve while being tremendously capable. They'll stop at nothing.

Dan and Superman: Jurgens on Superman #7

Spiral: From The Book of Saw Releases New Image

My Hero Academia Meets DC Comics with This Superman Crossover