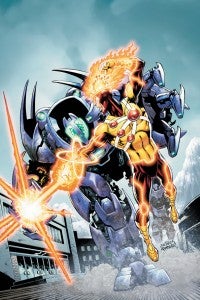 Ahead of this week's San Diego Comic-Con, fans are beginning to get their first looks at the post-zero DC Universe, and The Source, DC Comics' blog, has just revealed that Dan Jurgens and Ray McCarthy will be taking over The Fury of Firestorm: The Nuclear Men effective October's #13. The solicitation information identifies the former Justice League International writer and Superman writer/artist as the new ongoing writer/artist on the series, saying that he'll "blast Firestorm in a whole new direction" starting with the issue. Ray McCarthy will ink the series, although Jurgens' first cover (pictured at right) reunites him with inker Norm Rapmund and Hi-Fi Color, the creative team he worked with on Booster Gold until the launch of the New 52. That promised "new direction" will apparently involve not only a new villain called DataXen, but also a new twist on the Firestorm powers. What that twist will be is anyone's guess, although given the presence of only one Firestorm on the cover of the issue (as well as #0), one guess that's been making the rounds for a while is that the pair of them will be united in one body/look and that the ancillary Firestorms that have been used as supporting players in the series will disappear. Look for more with Dan Jurgens from the floor of this week's San Diego Comic-Con, where we'll talk to him about Firestorm and much more.

Dan Jurgens To Take Over Firestorm