Following the requisite wailing and gnashing of teeth over Mark Waid and Chris Samnee leaving their award-winning and fan-favorite run on Daredevil, Marvel Comics announced today via Nerdist that the title will return in March with a new #1 as part of the All-New Marvel Now roll-out.

The new series, probably unsurprisingly, will be written by Eisner-winner Mark Waid and drawn by Eisner-winning Chris Samnee. That's right: The same creative team whose departure was just announced, will be the ones who launch the book a month later. You're welcome. 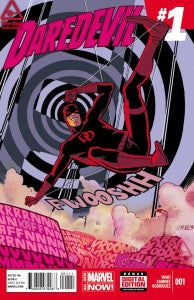 The move to California that will take place in Waid and artist Peter Krause's Infinite Comics miniseries will still be important, though; the title won't be exactly the same one that they just left. "Without spoiling too much of the final issue of the previous series, we can tell you that Matt has to leave New York and, in many ways, has no choice but to return to California–specifically, California, no where else to go," Waid said. "But that's where he and his cast will hang their collective hat from now on." The official solicitation text for the new #1 is available below, and the cover at left: "Join Marvel's fearless hero as he begins his most awe-inspiring adventure yet in the sunny city of San Francisco! Gifted with an imperceptible radar sense and a passion for justice, blind lawyer Matt Murdock—a.k.a. DAREDEVIL—protects the Golden City's streets from all manner of evil. But big changes are in store for Matt Murdock as old haunts and familiar faces rise to give the devil his due. Hold on tight, because here comes Daredevil…the Man Without Fear!"

Daredevil To Relaunch With Same Creative Team For Marvel Now