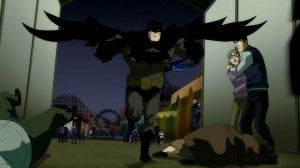 At the New York City Comic Con, Warner Bros Animation just revealed the scene where Conan O'Brien voiced the talk show host, David Endochrine, that interviews the Joker and his doctor. Andrea Romano praised his work, specifically how he got a difficult laughing sequence done in the first take. Bruce Timm added that he felt Conan O'Brien could have a real future in voicework. The Dark Knight Returns Part 2 is scheduled to be released on DVD and Blu-ray in early 2013.