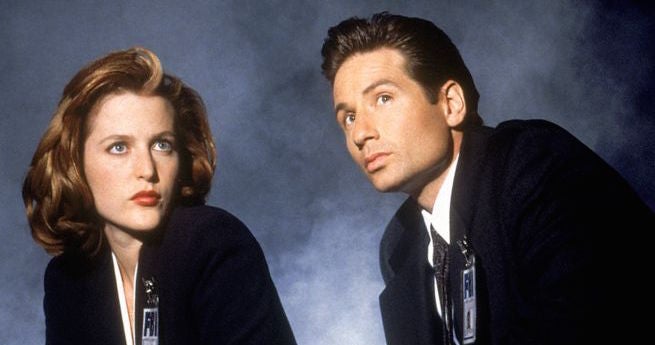 What's the first thing you do when you crack open a script detailing the supernatural, grotesque, and haunting?

You bawl your eyes out, of course.

Or, at least you do when you're David Duchovny. The X-Files star revealed that when he recently read the script for the X-Files' upcoming revival, he burst into tears of joy. Duchovny, who campaigned for the supernatural series' return, revealed that seeing his dreams and wishes realized, in an actual script, was simply too much to bear.

"I got the first script this morning," he told Entertainment Weekly. "I just read it about an hour ago and I started crying reading the first page. It was just so strange to see the names on the page. It had nothing to do with the script itself. It was just like, I'd been talking about this for a long time. We'd been planning it for a long time. It took a long time to get all the people in the same place and get the deal with Fox. So let's say two years we've been talking about doing it. Now it's the fun part. Now we actually get to do it. That was nice and strangely emotional for me, and I'll have to figure out how to use that [in the performance]."

FOX has ordered a six-episode run for the new X-Files series, which will air in January 2016. Alongside Duchovny, the series will feature old co-stars like Gillian Anderson, Mitch Pileggi and William B. Davis. But while the initial order is for a brief six episodes, Duchovny hopes to stretch that number out for more installments.

"I would be open to doing another cycle," Duchovny said. "I don't know that I could do a 20-episode version of this show at this point in my life, and I don't know that Gillian could. But I think everybody is open ended on what happens after this. Certainly, we didn't bring it back with the idea of ending it."

Are you excited for X-Files' return? Think it will send you into an emotional outburst? Let us know in the comments below.