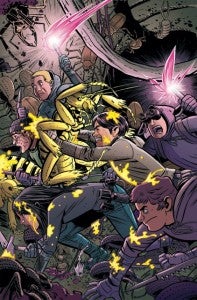 David Lapham, the Eisner Award–winning creator of Stray Bullets and Young Liars, is writing and drawing his own series again for the first time in five years, on not one, but two new creator-owned miniseries: Juice Squeezers and Kid McAlister.

The first of the series will run for four issues, and then the next will run for five, with no break in between so that Lapham will have nine solid months of new, monthly comics from Dark Horse at the beginning of 2014.

Hot on the heels of Juice Squeezers, Lapham weaves a western sci-fi tale with Kid McAlister, which follows a fifty-year-old cowboy trapped in the body of a twelve-year-old, as he returns home to Yuma, Arizona, after a long stint on the road. It’s not easy to stay hidden for long when you’re an eternally young “Electric Cowboy” and the best darn bull rider on the circuit. Also, Kid’s the only one who can see the body-snatching aliens taking over the populace, and he’s the only one who can stop them from taking over the world!