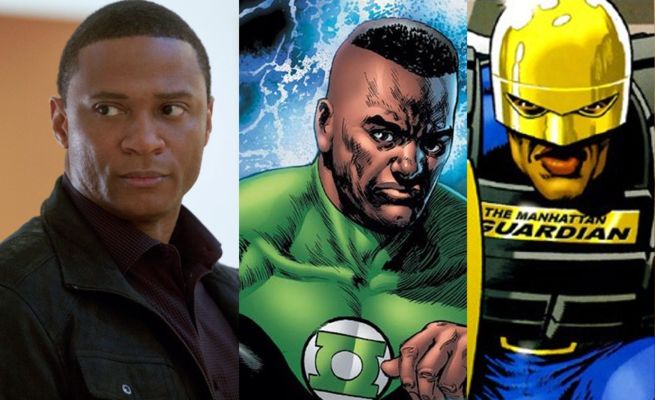 At The CW's annual upfronts presentation in New York Thursday, the network that birthed the DC TV Universe first held a red carpet reception for press to meet and greet the stars of their biggest shows, including Arrow, The Flash, upcoming spin-off Legends of Tomorrow… and those other non-comic book shows they have on the air too, we're told.

David Ramsey's John Diggle had a big season 3 of Arrow, with some major heroics, new team-ups, a marriage, a family, kidnappings, betrayals, and an overwhelming sense that something more was on the way for the character. Ramsey stopped for an extended chat with ComicBook.com about what his character has been through, and answered two very important questions about just who John Diggle is, and whether we can expect him bathed in green light – or at least in a mask – any time soon.

So David, Diggle was put through the ringer with great triumphs and great tragedies this season. He's really gone back and forth quite a bit. What's it like getting to play that entire range of emotions and events for you?

David Ramsey: He has. It's exciting as an actor, right? Anytime you get some stuff to do that's really meaty, you always like that. It's an action show, too, so anytime you get to kick butt that's always fun! (laughs) This show doesn't lack for stories. So they'll go to a character, go away from a character, go back to a character – the last part of the season has been kind of Diggle's time, and it's exciting every time the arrow points back to me, so to speak.

Excellent pun. (laughs) The Suicide Squad stuff is obviously very exciting, but it's also been interesting to see how much emotion and character development comes out of that stuff for you when you interact with them. What's it like for you when you have those kind of side stories?

DR: It's great. What's funny about that is it's almost – the Suicide Squad stories or Task Force X if you will, ARGUS stories with Diggle, they're almost another show. They take on this tone where it could always be a spin-off, you know what I mean? It has its own little energy.

So it's always exciting anytime you get to do something, where the B story becomes the strong story, almost another A story. That's exciting, and most of the time like you said, you get to find out something new about Diggle. Now unfortunately Deadshot is gone, and he was a major player in Diggle's life. But we'll see what happens next for next season.

Diggle's reaction to the Flash…

DR: I know, it was bananas.

It was so funny!

DR: Anytime I get to make Diggle be more like David, and just be funny. It was so funny, on the set, Andrew Kreisberg was there with me, and he was like, "Just go big when you see The Flash move at superspeed." I did it one time, and he said, "No, even bigger, just go bananas." I was like, "really? Okay!" and did what you saw. It was great to just take the reins off of Diggle.

So that's how David would react if he saw someone move at superspeed?

DR: Yeah, oh yeah, no doubt. How I would react though, I would do exactly that, then piss myself. (laughs) Did I say that? Yeah, seeing someone run that fast?

Everyone wants to talk about John Stewart. Is it "John Stewart Diggle" or "John Diggle Stewart" or whatever, and will he be Green Lantern? There's gonna be – obviously, [EP] Marc Guggenheim has said publicly that it's not the way to go right now. But people are still talking about it.

You know, I think – and Greg Berlanti has said this publicly too, I think that they've gone to great lengths to build up the mythos and persona of John Diggle. He's become a character in the comic books! Hopefully, he stays alive in the comic books and he's around for 20 years, and someone else will play him on TV or in a movie! That's a great honor. I think they've taken great strides to making John Diggle part of the lexicon, and that's an important thing. I don't think you want to abandon that.

I think if you put a mask on him as part of the Green Lantern Corps, and that's wonderful by the way – John Stewart is a wonderful character – but you lose some of that. You lose part of the "everyguy" character.

What about a mask for someone like Vigilante, or…

DR: I do think you need some kind of concealment. I agree with that. And to that end, they are working on something. You will see something for Diggle next year, season 4. You will.

All right, that's huge! Wrapping up, what was the most surprising thing for you from season 3?

DR: From this season? That's a good question. The most surprising thing for me was how they managed to make Ra's work. I didn't know what they were going to do with Ra's al Ghul. The actor who played him, Matt Nable, did such a great job with it, and the League of Assassins I thought was so formidable. I was surprised and I'm happy about how they handled Ra's and the League because that was important.

So what do you think ComicBook.com readers? Are you ready for Diggle to don some form of a costume? Let us know below!

Ramsey Confirms Mask Or Concealment For Diggle In Arrow Season 4