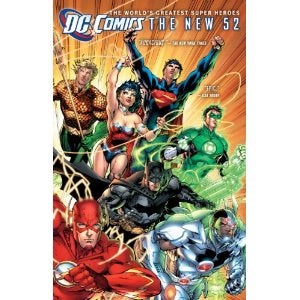 Saturday at the 30th annual Heroes Con in Charlotte has proven to be worth the crowds, the lines, and the massive amount of attention focused on getting just a few seconds of face time with comics legend Stan Lee.  Even though that in and of itself is enough to make a strong convention, there are several great panels on tap for today.  One of the inaugural ones for today focused squarely on DC's new 52 titles and the varied and complex characters, some old, some new and some reintroduced in different ways, inhabiting this new territory.  The panel featured some of the biggest names from DC's new run, including Scott Snyder (Batman, Swamp Thing), Cully Hamner (Blue Beetle), Jeff Lemire (Animal Man), Joe Prado (Green Lantern) and Ivan Reis (Aquaman).

The moderator opened the discussion by asking the same direct question of all the panel: why read your book? Lemire was the first to respond about Animal Man.  "At Marvel and DC there aren't many people doing horror like that, so I think the book fits well.  I'm really proud of the book and I think it's great."  Taking it a step further with the pointed question of what makes a DC book better than a Marvel book Scott Snyder responded, "It's not necessarily better, but what makes the new 52 different for us is that with the new 52, what's been fun for us is that they've given us a lot of latitude to create our own universe and history with these characters. The experience has been freeing to allow you to keep and honor things that have always been there, but do your own version too.  It's definitely my take on those characters (Batman and Swamp Thing).  There's a singularity on each book that's about that creative team.  I love Marvel too, so I don't think there's a big dividing line.  I think DC has a stronger priority to having singular books, and that works for the new 52."

Another similar question was about distinctions in art style between Marvel and DC upon sight.  Hamner responded, "I don't think there's a house style anymore.  I don't draw anything like Ivan does; we all have our own thing.  There may be a sensibility that there is a sense of unity that comes from the team.  I think everyone is just trying to do their best work.  I don't know anyone that approaches it from a 'I must draw or write like this person' sort of thing.  I don't get one."

Attention then turned to one of the most anticipated characters of the new 52, Aquaman.  "Aquaman is one of the most iconic characters out there," said Lemire," we are trying to make it simple and direct.  I think it's a good book.  It's a book for all audiences.  A kid can read it, a long time fan can read it." Prado also added, "I think it respects the mythology of the character.  The whole team involved loves the character.  There's a good synergy between everyone, and we all really want to do as great a book as possible with this character."

A question from the audience for Snyder centered on the Court of Owls and the orchestration of that. Snyder replied, "I had the court of owls in mind before 52.  I explained it to the editors and they bought it, even with the recent events of issue 10.  It's the story I would have done even if this wasn't going to be a new universe.  I realized partly into it that it was going to branch out into the other Bat books.  We all talked a bit about how to do this that if they [other Bat book writers] wanted to cross over with me they they could.  It was really organic.  It didn't come from DC.  Its an opportunity to look into Gotham history. The writers of those other Bat books, they could look at that idea and part of Gotham that may have intrigued them in the history of the different Talons and the eras they came from. With Dick Grayson's involvement in the court of owls, that was there all along.  The Nightwing team thought it would be a fun way to tie the books together.  The fun has been to see the other owl stories bloom in the other titles."

Piggybacking on that, an audience member asked if there was any "fail safe" in place if the reboot didnt work?  "No", all jokingly said.  There are no plans to reset continuity.  Lemire added onto that, "I could have made him [Animal Man] completely different, but I was a fan of the older stories and I wanted to honor and respect that history.  It was an opportunity to take stuff I liked about Buddy Baker and reset some of it.  Each title and editor made those decisions.  A soft reboot or a more radical one was up to each creative team, but I have no idea about a company wide plan if it didn't work."

Hamner addressed character redesign. "I was told I had to young these characters up a bit.  They can't keep appearing to be 35-40 years old.  It was more of a reactive process," he said, "we want to try something new with this character, so go for it.  The process I was involved in was odd.  I was originally hired to do designs, but a lot of times I was asked to comment on what other guys did with the art, and as a freelancer it was odd to have influence over what others were doing.  I'm still getting asked to look over work and do other parts of the creative process as well."

Lemire commented that the art and redesigns sometimes influenced a story's direction or plot, and so those things were incorporated into the direction of the work.  Lemire went on to announce that Snyder and he were planning a crossover with Swamp Thing and his Frankenstein title.  He commented that Frankenstein Agent of SHADE was close to being cancelled, but that the title will be undergoing some changes in the near future.

Prado and Reis commented on their initial gateways into comics, with Reis saying, "I always had a love for the form, and I read Conan especially.  Always as a baby I had comics in my hand."  Prado followed up, "My grandfather was a fan, and all the old comics he had.  He was a collector.  I started buying Teen Titans, and then Uncanny X-Men.  I always wanted to be part of that universe.  In Brazil, it was kind of an impossible dream back in the 70s, but here I am."  "What made me love superheroes," said Reis, "was the first Superman movie.  Seeing him fly around made me love superheroes, and that was my first real view into the superhero world, having read only Conan and black and white comics as a kid."

The subject quickly then changed to people who may deride and not speak kindly of the new 52. Hamner said, "You have to understand that people online complaining don't like anything, really, so you have to not really pay attention to complaining that everything is bad.  We're proud of the work that we do, and you have to have faith that the work that you're putting out is good.  The work speaks for itself at the end of the day."

When asked about what characters they would like to see introduced into the new 52, each panel member had names immediately come to mind "Stephanie Brown is a top one," said Snyder, "Cassandra Cain as well. These are ones I love that I would love to see brought back in to the new DC.  I would use them if they fit the story I'm telling".  Hamner would love another shot at the Question, Lemire said Kid Eternity in Justice League Dark, but he did tease that a new character from the Neil Gaiman universe would be joining him in that title soon. Prado mentioned Doctor Fate and Lemire said Aqualad. Prado followed up that they have Aquaman planned through issue #25. "We're hoping it goes on for a very very long time," he said, with Reis commenting, "We have fun working on this book.  It's a very important book to us."

The surprising announcement of the zero issues for all the new titles came up, and the panel said they were surprised by the announcement as well. "It came out of left field awhile ago," said Lemire," but it's a story where you learn something about the character that you haven't seen yet, from several years ago.  For me with Justice League Dark, it's a chance to show what history there is between Zatanna and Constantine.  For Animal Man it gives me a chance to see some history and detail there."  Snyder commented, "The funny thing with 0's is they kind of come in the middle of everything else, but you have a chance to make something personal and important to you on that character at that time.  We were just told to show something about the way the character was before the new continuity.  I'm referencing Year One in my Batman 0, and you're going to see a little bit of a different interpretation of some events from then, but I'm not trampling all over the Year One from before.  I'm hopefully laying the seeds for things that will pay off later in this zero issue.  In Swamp Thing you'll see Alec "dead" and how he became Swamp Thing exactly. I was really excited about it at the end of the day."

The panel ended with thunderous applause from the large crowd gathered, and more news will surely be coming your way later!